Description: Calligraphy is an art of writing characters. It dates back to several thousand years ago and combines the beauty of abstract yet emphatic shapes, the harmony of silence and music. The work represents the solemnity and proportion of ancient calligraphy, which has survived into our century, and the splendor and grandeur of the Maogong Ding (tripod), the Han dynasty lishu script and ancient caoshu inscriptions scattered at its bottom. Using lines and strokes — dry and wet, thick and thin, swift and slow, — using form to convey content, turning the form into the content. This is how calligraphy is created. Let us invite art in our lives, let it cultivate and refine the beauty of our souls and enrich our lives.

Description: When you work using the water and ink technique, you have to bear in mind the mood you want to create. This piece was inspired by the art of famous Chinese painter Qi Baishi. When you work in the se-i ("transfer of ideas") painting style, you generously apply red color and see large peaches swelling on the paper. You add lemon yellow, then blue, and shape the leaves and branches. Next you draw a heavy net of veins using black. You create a work which is simple, yet full of life. 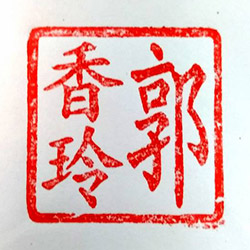 Kuo Hsiang Liang is currently head of the Pali Painting School in Tamsui district, Taiwan; member of the judging panel at the National United University (Taiwan); an Expert Consultant for the Taiwan Association for Multicultural Art Exchange; Permanent Honorary Advisor for the Douhuanping Academy of Arts; a permanent board member of the International Calligraphy Association "Lanting"; member of the board of the Zhonghua Calligraphy Society and the Taipei Watercolor Association "Yachong". Member of the jury for the Ministry of National Defense's Jinxiang calligraphy competition.

Her works are created in a clear, quiet, powerful, and vivid manner and are famous for being "as beautiful as orchid flowers".

Participated in 34 solo exhibitions. Her calligraphic works can be found at the National Sun Yat-sen Memorial Hall, the China Art Gallery (the Taipei 101 building), TransWorld University. She is among the world's most prominent cultural figures as listed by the Weifang Museum of Stone Steles and Tablets located in Shandong province, the People's Republic of China. Some of her works are in permanent storage at Yongquan Temple in Fujian province's capital city of Fuzhou; some have been given to Taipei Hospital as charitable donations. Her art pieces can be found in the collection of the Stele Forest Museum (Taijiquan Association, Yongnian city, Hebei province). Some of her works have been purchased by the Pacific Cultural Foundation Art Center. She participated in the writing of a 100-meter calligraphy scroll: the piece was created by artists from mainland China and Taiwan in the city of Zhangjiajie.

Among the biggest exhibitions she has been invited to participate in so far are: an exhibition organized by the Ministry of National Defense at the "Boai" gallery; the Global Chinese Art Exhibition; the Taiwanese Painting Exhibition which was held in a big hall on the 32nd floor of the Taipei 101 building; the Chinese Painting and Calligraphy Exhibition in the city of Haikou, Hainan province; the "Art Sounds in the Clouds" exhibition at the Taiwanese Cultural Center (Canada); the Zhongtian Gallery's exhibition "Fo Guang Shan — Australia"; the Third Joint Asian Exhibition at the Pearl Art Gallery in Penang, Malaysia; Shenzhen International Cultural Industry Expo (Taiwan, Hong Kong, Macau, mainland China); the Calligraphy and Painting Exhibition at the Hou Beiren Art Museum in Kunshan, Jiangsu province.

In 2015, she received the highest national "Chinese Literature and Art" award and the "Best Masterpiece in Five Continents" award. A medal and a Certificate of Recognition for her role as an Expert Consultant at the International Japanese exhibition "True Sun". A prize for serving as an Expert Consultant at the International Cross-Straits Painting and Calligraphy Exhibition (mainland China, Hong Kong, Macau, and Taiwan). Certificates of Merit from French and Chinese cultural ambassadors. 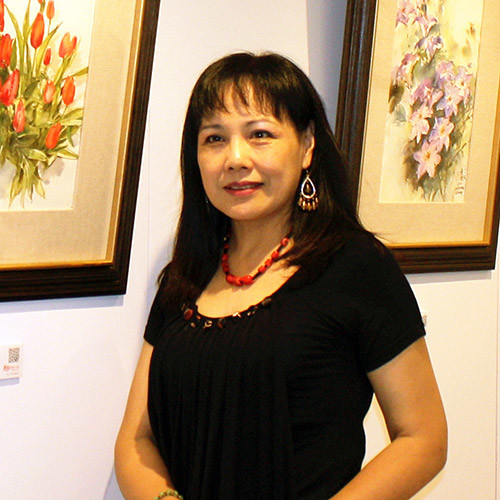