Further education: gilding, wood and textile handling, video and photography as well as curses in philosophy and psychology."

Developing of writing-performances with students.

Articles and lectures about art and the art of writing, readings of own literary work.

2006 — Art-installing of "philosophical awning" (book-objects made of silk) at the University of Mayence and further on at numerous other places.

2007 — First conceptual exhibition at the Klingspor Museum City of Offenbach: "The trace of the other one" (Inkjet-printed silk)

2009 — Creation of a mobile assembly of 56 big wooden letters: “wordgarden” as an artistic and educational project. Working in „wordgarden“ with several groups of people

Since 2010 Environmental Art project with printed silk and letters, working title: “languages of silk in nature”, including work with video and photography, it took place in several countries.

2012 — invited by the Goethe Institut of Genua to show “indiscreto” at Palazzo Ducale, Genua

2013 — "languages of silk in nature" in Klingspor-Museum Offenbach

2013 — “Languages of silk in nature” in the environmental art-journal “Lake” of the University of British Columbia, issue 8

2014 and 2015 Artist in Residence in nature reserve in Bosnia, continuing of "languages of silk", exhibition

2015 — presentation of Artwork at the Symposium “Letters + Film + Film + Letters” of Institute for Theatre, Film, and Media Studies of Goethe University, Frankfurt/M.

2016 — “Languages of silk in nature” at Galerie Carlshöhe, Eckernförde and SOH/Klingspor Museum Offenbach

“Languages of silk” published in “The Dark Mountain Project” 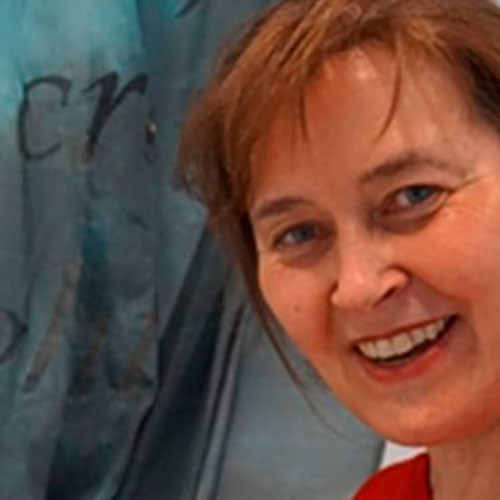