Chen Zhen graduated from the Nanjing University of the Arts and the School of Chinese Painting and Calligraphy of the China Academy of Art, member of the Jiangsu Calligraphers' Association. At present, he runs the Tianshi Goshan publishing house, editor-in-chief of the Yixing Clay (Zisha) channel at Sina (“New Wave”), China’s biggest online media company offering both news information and entertainment content.

Mr Chen comes from a family of authors from Zhejiang province, Qingyun County. He was born in December 1968 in the town of Zhangzhu in Yixing, a county-level city, on the border of three provinces: Jiangsu, Zhejiang, and Anhui.

His father gave him primary education. Chen Zhen made his first steps in calligraphy imitating the works of Yan Zhenqing, a leading Chinese calligrapher. Later, he took an interest in the Six Dynasties period, or Wei Jin Southern and Northern Dynasties, and devoted himself to the study of four major calligraphers of the Song dynasty: Su Shi, Huang Tingjian, Mi Fu, and Cai Xiang. He also focused on the study of calligraphers of the Yuan, Ming, and Qing Dynasties.

Imitation of the great teachers of the past as well as an in-depth and comprehensive study of the art of calligraphy enabled him to excel at the three major calligraphy styles: Kaishu (“regular script”), Xingshu (“running script”), and Caoshu (“grass script”). Mr Chen has also mastered the styles of the Northern Kingdoms, Zhuanshu (“seal script”), and Lishu (“clerical script”, or “chancery script”).

In his early years, he also studied monochromatic painting under a famous artist and guohua (traditional Chinese painting) master Yuan Jinzhou. At the Nanjing Arts Institute, he was instructed by Huan Dong, Ji Gong, and others. The vast knowledge and experience he gained through interaction with contemporary artists enabled him to create his own independent and energetic style of writing as well as to become a truly virtuous and educated person.

During the 35 years of his devoted study and practice of calligraphy, he never aspired fame but longed to perceive and penetrate the secrets of calligraphy, which bore fruit as he made great artistic achievements. His life experience and art helped him learn to truly appreciate the beauty of characters.

In recent years, apart from perfecting his brush calligraphy and working on the spacing between characters and strokes, he has been trying to unlock the secrets of ink.

Abstract art embodies the yin/yang continuum, the change of generations, the harmony of the golden mean, the beauty and energy of the extremes. Ancient wisdom has it that human spirit rises above matter which is regarded to be secondary, and it is only with the heart that one can understand calligraphy.

Chen Zhen firmly believes that a person capable of virtue will accomplish great deeds, and that continuous self-improvement is the best way to apprehend the mysteries of art. 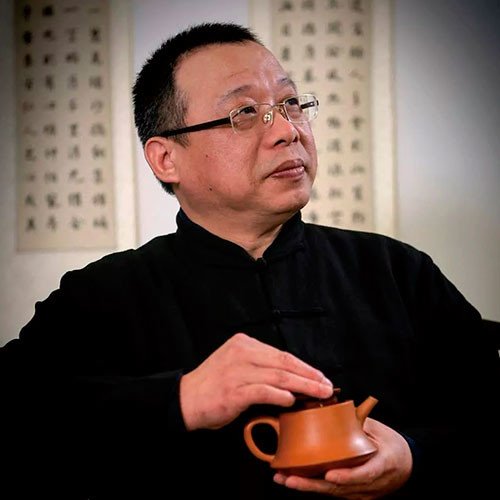