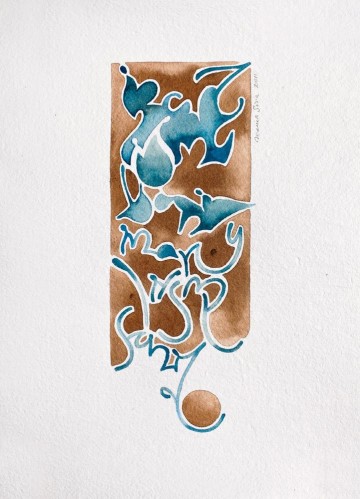 In Art Lies My Sanity 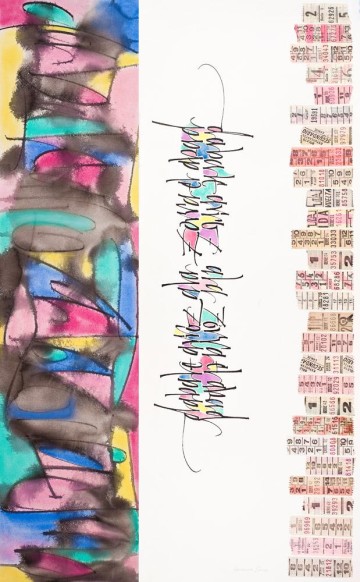 Marina Soria was born in Buenos Aires, Argentina, in 1961.

She obtained both a BA in Fine Arts (5 years study) and a BA in Graphic Design and Publicity (3 years study) in Buenos Aires. Besides formal education, her training includes two years in Hector Medici’s Art Studio, a year course on Sculpture in the School of Fine Arts in Buenos Aires and a year workshops in sumi-e and Western painting.

Between 1989 and 1995, she was a professor at the University of Buenos Aires (UBA), teaching Graphic Design first and later a course in Editorial Design. While at UBA, she met Carole Johnson, an American calligrapher, who introduced her into the calligraphic arts. In 1998, she was promoted to Associated Professor and started teaching a course on Typography, which introduced students to the basics of calligraphy and calligraphic alphabet, a subject never before taught in Argentina. Thereafter calligraphy became a compulsory subject at the Graphic Design course.

She was a founding member of Calígrafos de la Cruz del Sur, the first group of calligraphers in South America. Between 1997 and 2006, the group conducted outstanding performances in Buenos Aires, promoting calligraphy through lectures at universities, conferences, workshops and exhibitions.

For personal reasons, in 1999 she discontinued her academic career at UBA and dedicated herself exclusively to calligraphy. Since then, she has been mostly interested in experimental calligraphy and in creating new calligraphic scripts.

In 2007, the University of Buenos Aires hired her to teach the first seminar course in experimental calligraphy for post graduate students.

Marina is a repeated prize-winner, has many diplomas and certificates; and has exhibited her work in painting and calligraphy in different art galleries and museums in Buenos Aires and abroad: Montevideo, New York, Madrid, Berlin, Moscow, and Tokyo.

In 2001, she travelled to Tokyo, Japan. This trip had a great impact on her style, because of her original fascination for Oriental arts. In her attempt to learn even more about Eastern philosophy and culture she attended a yearlong workshop in sumi-e.

Her work can be found in the annual issues of Letter Arts Review, the most prestigious International publication in this discipline; Bound & Lettered and the ACA´s Newsletter from USA.

Currently, she works as a fine arts artist and calligrapher in her private studio, doing works upon request and creating books. As far as teaching is concerned, she offers workshops on calligraphy for adults all year round and she tries to make calligraphy accessible to children through workshops and lectures in schools. 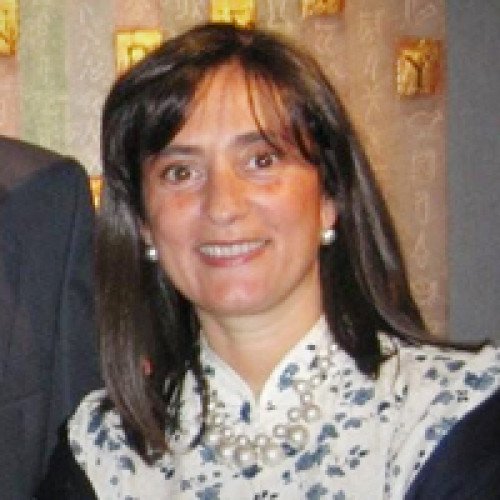