Letters in a Window 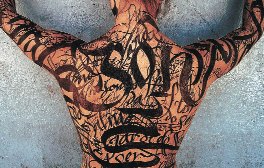 Rather unexpectedly the International Exhibition of Calligraphy in St. Petersburg showed that the art of beautiful handwriting is in demand. During three working days several thousand people visited the show.

Perhaps, the overcrowded exhibition halls will remain the only negative impression of the show. For four exhibition days people were passing through the exhibition halls in a continuous mass despite the fact that the exhibition occupied one of the floors of Repin Academy of Arts in University Embankment. I suppose, suchlike welter is a usual thing for the Hermitage during the peak tourist season.

The venue was chosen intentionally with the clear implication: calligraphy is a valuable kind of art worth being placed alongside the greatest artworks. One cannot deny this after studying the exposition. By the way, contemporary calligraphy often includes the elements of drawing. There were a lot of works which could be described as “graphics plus letters”. The letters as if grow through images, complete them, comment on them, or turn them upside down. However, only a few chose this path, there are a lot of masters who are faithful to letters as the main characters of their artworks and do not let any other images on paper.

Onу can wonder, what is so difficult about writing a word, phrase or text? The exhibition in St. Petersburg showed how different the letters can be. For instance, one can spend 15 minutes before a boring text of the period of Soviet stagnation (something about “rationalization” and “industrialization”) written in an Old Slavonic calligraphic style: it is really that beautiful! And an old English ballad written in a Gothic style is as if singing on paper.

National folk spirit is very strong at the show. If a visitor unwillingly starts reading the text in Russian or, say, English, then Arabic ligature or Chinese hieroglyphs are taken as pure art. At some certain time the exhibition turns into an ethnographic show. When, for instance, one looks at the hieroglyphs by a Japanese master Sashida Takehusa, rough, exquisitely floppy, resembling the history of Japan, which is as cruel as wonderful. And quite different are the Koran suras written by a Palestinian artist Abu Afash Hasan, violent, clear, as if flying in the sky or swaying in the waves.

The historical part of the exposition is worth individually mentioning here. The organizers managed to collect a large selection of letters, notes and autographs of Russian emperors and members of the Romanoff family starting with Peter the Great. It seems that calligraphic handwriting was an inherent skill of aristocracy. It would be interesting to hold a contest of handwriting among contemporary bureaucrats. I am afraid the result would hardly be possible to exhibit.

By the way, restoration of calligraphy as an applied skill and not only an elite kind of art is one of the exhibition’s objectives.  The master classes, seminars, lectures by world-famous calligraphers from Russia, China, Germany, India, Mongolia and Israel are meant for those who want to improve their handwriting. Anyone was able to try to learn neat handwriting. It is quite possible that exercises with a brush and paper made someone beautiful inside. Every person is writing his destiny by himself.