Calligraphies of the Desert by Hassan Massoudy

Looking back on 2020, a year defined by the experience of a global pandemic, there has never been a better time to pause and take stock of our place in the world.

Calligraphies of the Desert by Iraqi calligraphist Hassan Massoudy is a collection of poems and proverbs which offers us the space to do just that.

Since the dawn of time, humanity has turned to the desert as a place of reflection and spiritual awakening. Through his work, world-renowned calligrapher Massoudy explores timeless themes of beauty, love, peace, and forgiveness with this book.

It is a compilation of different poems, with the calligraphy of literary luminaries from the Middle East such as Rumi, Ibn Battuta and Khalil Gibran, to name a few.

Also included are proverbs and poems from British Arab writers and explorers such as Gertrude Bell, Richard Burton, TE Lawrence, and Wilfred Thesiger.

Thanks to the likes of the illustrious writings of Rumi, Middle Eastern poets have enjoyed a resurgence in mass popularity.

Now, these have once again been given a new lease of life, a breath of fresh air, via Massoudy, who is generally considered to be the world's best living calligraphist.

His work has influenced a generation of calligraphers and was exhibited and used as the primary promotional image for the British Museum's 2006 exhibition, Word Into Art: Artists of the Modern Middle East.

Massoudy has exhibited internationally and has works included in the permanent collections of the British Museum.

The striking thing about the book is the depth, colour and meaning woven into every piece of work showcased, shared with words of wisdom, including Arabic proverbs:

"The dunes are changed by the wind, but the desert is always the desert"

For instance, in one of the offerings of The Light/Al-Noor passage in Khalil Gibran's poem, he cites in English and Arabic:

"If you sing of beauty though alone in the heart of the desert, you will have an audience"

The juxtaposition of the proverbs, poems and illustrative interpretations together are not so much an art book, but rather a work of art woven into every page.

Calligraphies of the Desert is a treasure for poets, dreamers and travellers reaching out across time and place, wherever they may be. 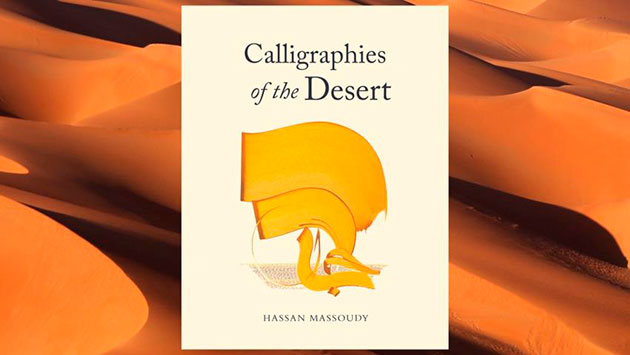 Calligraphies of the Desert by Hassan Massoudy