The Museum of Calligraphy in Moscow demonstrated a giant manuscript 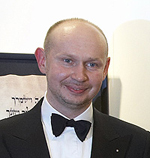 The Contemporary Museum of Calligraphy located in Sokolniki celebrated its first anniversary in August. A World Famous Mezuzah, a chef d’oeuvre of world calligraphy listed in the Guinness Book of Records, was presented in honour of this date.

What is the World Famous Mezuzah?

— It is a text consisting of 713 letters of the Hebrew alphabet, including excerpts from the Pentateuch. Traditionally, a mezuzah is kept in a special decorative case and is affixed to the doorframes in Jewish homes. Anyone stepping inside touches it and receives a blessing. In the Russian translation the mezuzah has a respectable prefix “Tsar” because of its size: 76 cm wide and 94 cm long. It is the largest mezuzah in the world.

Why is it only the case that is shown?

— Because it is a religious text! According to the Hebrew tradition it is forbidden to take a mezuzah parchment out of the case. Actually, we did not want to just showcase the decorative case, so we just made an exception for the audience to see it on the museum’s anniversary date for one hour only.

Do you mean that the visitors will not be able to see the main exhibit of your museum?

— I think, we will demonstrate it from October 14th to November 14th during the autumn exhibition. Maybe then we will exclusively take the mezuzah out of the case.