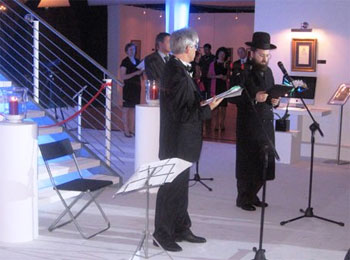 A formal opening ceremony of the 2nd International Exhibition of Calligraphy took place at Sokolniki Exhibition and Culture Centre.

The event was organized by the Contemporary Museum of Calligraphy with the support of the Ministry of Culture of Russia and under the auspices of the Commission for the Russian Federation of UNESCO.

Nikolai Isayev, Deputy Director for Educational Programs of the Contemporary Museum of Calligraphy, who opened the ceremony, noted that despite the fact that the museum was opened only one year ago, its collection had increased considerably.

In his welcoming speech Andrei Lapshin, Head of MVK Company, engaged in exhibition organization at the Sokolniki Exhibition Center, said the fifty years of the centre’s development had brought forth many projects that were doomed to success and he expressed hope that the calligraphy project would follow the same pattern.

Rabbi Aaron Gurevich, Head of the Military Division of the Federation of Jewish Communities of Russia, read off a congratulatory message from Berel Lazar, Chief Rabbi of Russia to the organizers of the exhibition.

It says inter alia, “Calligraphy is not merely an art. For centuries it has been an act of sacrament. Calligraphers have scribed the Holy Books of all nations and religions. As for Jews, the calligraphic skill, “sofer STaM”, is the profession which is taught in religious colleges and institutes. All holy books and significant cult-objects like tefillin and mezuzahs can be scribed on parchment only and in a special way. There is a plethora of laws regulating calligrapher’s work. Every synagogue has the Torah manuscripts designed exclusively by masters of calligraphy. Sometimes it takes several years of hard work to write such a scroll. We are proud the exhibition in Moscow demonstrates a World Famous Mezuzah, a unique calligraphy work enlisted in the Guinness World Records.”

“It is highly symbolic that the exhibition is timed to coincide with the beginning of a new year-long Torah reading in the synagogues of Russia and around the world.”
“Thus, this show also admits the contribution of Russia, its people and traditional confessions to calligraphy development as an important means of spiritual progress and promotion.”
Rabbi Gurevich added he was closely following the museum collection growing and appreciated the kind environment of the exhibition.

The welcome addresses from Kirill, Patriarch of Moscow and All Rus and the Mufti Council of Russia were read aloud at the ceremony.

An essential part of the ceremony was a performance by renowned cellist Denis Shapovalov, accompanied by the Helios quartet followed by simultaneous master classes by six calligraphers from Russia, France, Italy, and Iran.

Everyone could watch the ceremony online from six different viewpoints via ten computers with Internet access installed in the pavilion.

The exhibition features more than one thousand three hundred exhibits. The most valuable and unique collections comprise calligraphic works by artists from thirty-three countries, including the Sacred Calligraphy Collection, collection of calligraphic membership applications to the National Union of Calligraphers, and other exhibits.

The funds of the exhibition contain manuscripts (old and rare books, single editions and miniature books), books on calligraphy and calligraphic writing utensils.
The exhibits of sacred Jewish calligraphy occupied a prominent part of the display.

Famous Israeli calligrapher Avraham-Hersh Borshevsky personally affixed his World Famous Mezuzah listed into the Guinness World Records (94 x 76 cm) to the wall. The author noted that it took him five days to make the World Famous Mezuzah, whereas it usually takes three hours to write a mezuzah text.

Because of the mezuzah’s large size it took him longer to dry the ink.

Speaking about the essence of calligraphy, A. Borshevsky defined it as a kind of art which shows the beauty of human speech.

Besides participation in the International Exhibition of Calligraphy, the Israeli Cultural Center of the Embassy of Israel held the solo exhibition of Avraham-Hersh Borshevsky and a master class for the students of Jewish schools.

The exhibition will work till November 14th.