“In the beginning was the Word,” says the Gospel according to St. John. It was the spoken word, however, the word that was kept alive as long as generations of people passed the word on from person to person. When the chain broke, the word disappeared. It only became immortal after it was visually recorded by means of an alphabet, a system of symbols where each was assigned to a certain sound and had a shape of its own.

The diversity of alphabets is stunning, and each one is unique. The people who could draw the letters to perfection and skillfully transpose it onto a stone, a piece of papyrus, parchment or paper are called calligraphers. From time immemorial, they have been valued by the lovers of the beautiful as highly as poets, painters or musicians. Throughout the millennia, calligraphers have created old Egyptian hieroglyphs, the Assyrian cuneiform, the Hebrew alphabet, Chinese and Japanese characters, Sanskrit texts, Arabic letter panels, the powerful and tranquil Latin alphabet, and the ligatured Old Slavonic script... If only we could bring together examples of all the written symbols created by mankind, it would be a striking museum!

As it turns out, there is such a museum already. The Contemporary Museum of Calligraphy has recently opened in old Sokolniki Park in Moscow. The museum was organized by the National Union of Calligraphers with the assistance of the International Exhibition Company (MVK). The first exhibition at the museum was entitled “Mysteries of the World’s Calligraphy.” There were over 250 items on display: works by present-day artists representing a variety of calligraphy (handwriting) schools of Russia, European countries, the U.S., Israel, China, Japan, Mongolia, Arab countries, India, Turkey, Brazil, Peru, Armenia, Iran, and other countries as well as ancient manuscripts, applied calligraphy on porcelain, metal, glass, and writing utensils of different peoples, eras, etc. The museum was created in order “to provide the conditions for developing calligraphy as a language of mutual understanding without borders.” 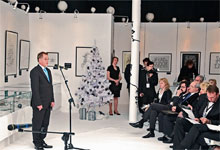 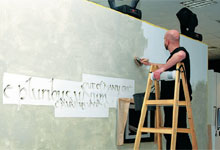 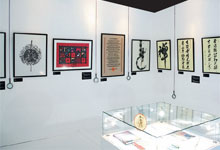 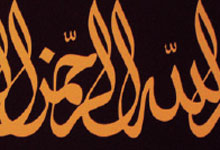 Oleg Torchinsky.
Illustrations courtesy of the Contemporary Museum of Calligraphy.