The Constitution: the unexpected angle 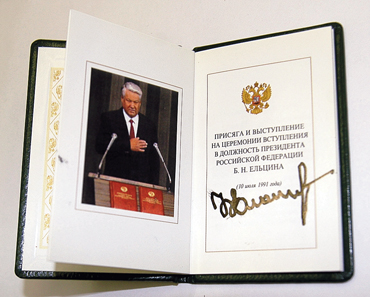 The Mystery of the World’s Calligraphy exhibition was rapidly held (six days only) at the premises of the Contemporary Museum of Calligraphy located in Sokolniki. The event was organized by MVK, the International Exhibition Company and the National Union of Calligraphers (Alexey Shaburov, project’s director).

So, where is the connection between the ancient art of beautiful handwriting and the Constitution?

Among the exhibits there is the handwritten copy of the Constitution of the Russian Federation of 1993 executed in a large format (A2). The masterpiece is a brainchild of Pyotr Chobitko, Head at the presidium of the National Union of Calligraphers, Professor of the Graphic Arts Department of I.E. Repin State Academic Institute of Painting, Sculpture, and Architecture of St. Petersburg, Member of the Union of Artists of Russia. He has been working on the handwritten Constitution all alone for about five months (although, his assistants helped him in the sheets of paper ruling).

There are some handwritten masterpieces among side the mini books presented. For instance, the Little Canon, Troparion (50х80 mm, 1801-1825) and the Church Calendar (55x82 mm, 1832), both of the texts are executed in the Cyrillic alphabet and Old Slavic.

It is difficult to say if the current Constitution is to be amended in the future or not and how many times it might happen. But the uncorrected Constitution of Russia of 1993 which celebrated its 15th anniversary will remain at the Contemporary Museum of Calligraphy and be stored for history at least as a work of art. Afterwards, if amendments are to be made, the masterpieces will stay precious anyway.