The Beauty of Handwriting Matters!

Sokolniki Exhibition and Convention Centre has become the home for Russia’s one and only Contemporary Museum of Calligraphy. The unique Mystery of the World’s Calligraphy exhibition was specially kicked off to mark its opening. There was no such museum in Russia before. Neither did it exist in other countries. The event was organized by the National Union of Calligraphers with support of MVK, the International Exhibition Company.

There is one more distinctive feature of the exhibition. The one and only handwritten copy of the Constitution of the Russian Federation made for the 15th anniversary of Fundamental Law adoption is showcased. 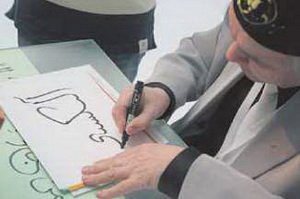 This delicate folio, just like all the important and unique copies, is hidden behind glass. Please, enjoy it but do not touch. Like all treasures this document is under guard. To be honest, it is very tempting to hold this unusual book and to flip through the pages! But it is impermissible. Imagine if everyone touches this precious exhibit, what will become of it?

A bunch of skilled craftsmen have been scrupulously working on the main law of the country for a long time. They aimed and tried to get their work flawless.

Spokesmen of the State Duma, the Government of Moscow, the Moscow City Duma and representatives of the Diplomatic Corps, i.e. ambassadors and attaches of the foreign states“ culture attended the opening of the museum. They congratulated Muscovites with such an important event in the cultural life of the capital, highlighting two facts above all the others: the opening of the museum and the creation of handwritten copy of the Constitution of the Russian Federation.

The main book is not the only pride of the opened exhibition. A collection of books in miniature, constitutions of other countries, should be considered with certain attention. Among these constitutions, it is worth noting the edition of the first Soviet Constitution of 1921. There are also some other must-sees: the inauguration speeches and oaths of the presidents Boris Yeltsin and Vladimir Putin; a handwritten canvas with the inauguration speech and oath of Dmitry Medvedev, President of the Russian Federation.

Crossing the threshold of the museum visitors will find themselves in a whole different world. The atmosphere is absolutely diverse and full of amazing colours. The exposition fascinates with a spatial light game, videos broadcasting on five screens, flower installation, calligraphic performances of artists from Germany who arrived here for the museum’s opening. There are items of applied calligraphy presented, as well as old manuscripts and rare letters, handwritten books in miniature and of course, writing utensils of the past and present. These things first of all impress visitors and help them comprehend one of the oldest arts in the world, the art of calligraphy.

The exposition of the new museum includes exhibits from other countries, as well as easel paintings made by representatives of different calligraphy schools in Europe, the Baltic states, Armenia, the USA, Israel, China, Japan, Syria, Turkey, Australia, India, Brazil, Peru, Iran and others. The space of the exhibit halls is designed in a way to make the visitors feel the unique atmosphere of the museum from the very first glance and enjoy images, music and lights looking as one power and covering the whole space downward. This atmosphere helps visitors to dive into calligraphy and understand the hidden sense of the ancient art.