The Alphabet is a Panacea

Last week St. Petersburg became a calligraphic capital. Enthusiasts of this lost, at first sight, art have gathered in the cultural capital and unanimously stated that calligraphy has the power to cure many illnesses and improve the creative potential of every person.

Calligraphy is an art of beautiful and accurate writing. In ancient times only monks mastered this science since they were honoured to copy sacred texts. Modern people can hardly understand the huge difference between the terms “literacy” and “calligraphic skill”. Thus, monks sitting in their monastic cells for months and years meticulously wrote every letter in handwritten books, which were of great value as its author was considered to give the book a piece of his soul with every letter he wrote in it !

Nowadays it is difficult to view calligraphy as something more than an eccentric hobby; who wants to write beautiful letters for hours when there’s a computer within reach? It turns out that there’s reason to it. For instance, such a “small thing”, the long life of calligraphers!

“It was viewed this way in Ancient China“ explains Chairman Of National Union of Calligraphers Petr Chobitko. “We can’t provide statistics but there are some proved facts for sure. When writing the pulse calms, breathing leveled. A person who masters calligraphic hand-writing increases one’s creative and intellectual potential. Not in vain do the Japanese necessarily teach calligraphy specialists in nanotechnologies; they view this painstaking labour as it helps to bring up qualities essential in their future work. Only playing violin could compete with calligraphy!

Besides, Petr Chobitko himself views calligraphy as his rescue. When he wasn’t even a year old he suffered a dramatic fire in his house. Since then the child began stuttering and doctors were powerless to cure him.

“I did my best to graduate from secondary school“ explains the artist. “When I was a first-year student I started calligraphy and devoted much of my time to it. But stuttering followed and so I had no academic progress. However the stuttering soon disappeared! While in a year I had made such progress in my studies that I mastered all those subjects which my course-mates were learning for a few years. This was the time when I discovered the link between my sudden successes and calligraphy. Now teaching less able children calligraphy teachers and I notice that after a few months those children become smarter! And cure their chronic diseases. By the way, I can draw conclusions from the hand-writing of my student as a doctor uses diagrams to see the patient’s condition. The condition of hand-writing tells about one’s inner problems. Have you ever noticed that in bad mood hand-writing becomes less decipherable?

These audacious conclusions drawn by Petr Chobitko are partly confirmed by other professionals.

“There’s a grain of truth in it“ thinks George Kozubov d.s.c.(history of art) from Moscow . “When you write letters a certain rhythm that coincides with the heart and breathing appears. It is not by coincidence that penman of medieval scriptoriums breathed simultaneously! Besides, there are nerve endings on the finger tips which are connected with certain brain lobes. If the finger tips hold a pen then the brain harmoniously develops.

Calligraphy has nothing in common with hurrying and fussing since it demands assiduity and calm. That really suits business men who want to avoid the stress of the City. Some say that lessons of beautiful writing has a similar effect with that of a visit to a psychotherapist: write all 33 letters of the alphabet in a fancy way and anger and annoyance will disappear! Besides, it is important to hold a pencil or pen in a certain way with three fingers thus impulsive movement of the fingers reach the brain better.

“Those children who can’t write beautifully have strong emotional differences“ states Peter Chobitko. “Their right lobe is undeveloped and they are senseless. So it’s strictly recommended to master the writing of letters of their native language before mastering a computer.” 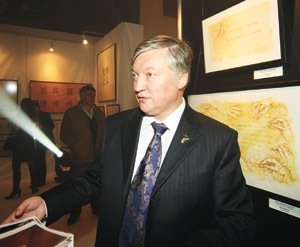 ”I write everything by hand”

“I haven’t mastered the art of calligraphy myself but I actively propagate it. The utility of decipherable writing is, unfortunately, underestimated. Schools first allowed children to use ball-point pens instead of usual ink pens, later writing lessons have been abolished. Our officials can’t even imagine what harm this act can bring! Since some children’s handwriting is like chicken scratch, and this is chronicle as it affects character: abstractedness and inaccuracy appear. For all of my life I have written thousands of pages without a computer. I’ve noticed that bad mood can easily be changed by a few beautifully written lines, while inaccurate ones provoke disrespect.

Simple writing task during the interview

Specialists know an easy way to test future employees during an interview: give them a sheet of paper, pen and ask them to fulfill a primitive writing task-that is draw sticks and circles in a few lines according to the example. By the way people fulfill the exercise one can judge their working potential. If the sticks are separating, circles of different size then this person will be irresponsible and uncollected in work too. If the line is not complete ,then this person lacks thrift. But when one sees professionally written lines one can say for sure that the writer will be a good organizer!

Last week in St Petersburg during the International Calligraphic Exhibition the first handwritten Constitution of Russian Federation was presented. The author is Petr Chobitko, an artist from St Petersburg, he has worked on the law code for over three months.

“To tell the truth the work is not finished yet“ said Petr Chobitko “In order to write the Gospel, monks were isolated for 8-9 months which is impossible nowadays. I climbed up to the top of my workshop to work in silence and calmness. Never working in a bad mood since it could reflect in the beauty of the letters.”

Besides, the Constitution is written in… fish ink! It is said to be waterproof even after two centuries. Three manuscripts are planned: one will be demonstrated at world exhibitions, the second will be preserved by the Contemporary Museum of Calligraphy and the third will be granted to the President of the Russian Federation.