Russian-Taiwanese relations: calligraphy, the ’pharmacy for the eyes’

The International Exhibition of Calligraphy drew the masters and connoisseurs of the calligraphic art from all over the world to St. Petersburg. 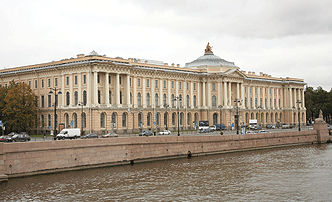 (Photo by Ya. Kostyuk)

From September 16th till September 21st, 2008 the St. Petersburg State Academic Institute of Painting, Sculpture and Architecture n.a. Iliya Repin welcomed the International Exhibition of Calligraphy. The project was initiated by the National Union of Calligraphers and MVK International Exhibition Company. The project mission is to form a beautiful and healthy society. The show attracted meticulous attention of experts, cultural workers and the art intellectual elite of the Northern Capital of Russia. The visitors were arriving with families, classes and even a just-married couple attended the show. During the exhibition days it was attended by 17, 000 people, the majority of which were schoolchildren, students and the only people who were missing at the show were the indifferent. The exhibition made a true outstanding event, and attracted people from other cities of Russia!
The visitors were mesmerized with the size of the exhibition (360 works by 45 calligraphers from 27 countries) as well as the variability of artworks on display. The age limits of exhibitors ranged from 28 to 85 years! The International Exhibition of Calligraphy aroused intense interest of the Russian public community.

The exhibition geography couldn’t help but impress: the show represented exhibitors from four continents: Europe, Asia, America and Australia. The event provided maximum opportunities for communication with the artists and purchasing of specialized editions concerning calligraphy. The show was exciting and unusual, and many artworks on display were genuine masterpieces! The show also welcomed the participation of an illustrious Taiwanese micro-miniaturist Chen Forng-shean who was delighted to be in a far off country and communicate with old and new friends of his. He had brought his calligraphic artworks as well as miniature compositions which could only be examined with a magnifying glass. All of his miniatures were distributed among his friends! He will surely take warm memories of the show to his beautiful house-museum in Taipei.
Alongside calligraphic artworks executed on paper and parchment hanging on the walls in beautiful frames there were 140 more items of applied calligraphy, handwritten decrees of the Russian tsars, historic rarities and writing utensils. Three stands were occupied by the exposition of your obedient servant. The presentation included about 30 miniature books and booklings related to the history of writing, alphabet, initial, font and calligraphy. Beside genuine handwritten books issued in the early 19th century (only one existing copy) were displayed modern facsimile editions which fully reproduced the books of the 13th-14th centuries written in Latin, as well as facsimile copies of Goethe’s, Puskin’s, Shevchenko’s and Baratashvili’s literary works. 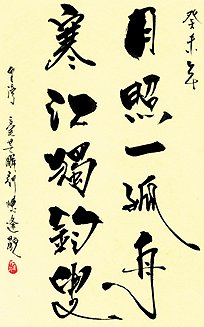 The exhibition hall interior was festive and elegant at the same time with two dominating calligraphic colours: black and white. Both the opening and closing days of the show were especially memorable. On the last exhibition day the participants of the young calligraphers’ competition were presented with awards. The event inspired all visitors and left them regretting they hadn’t known the beauty of calligraphy before.