Once upon a time Berlusconi gave an anthem to Medvedev 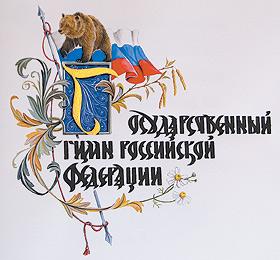 Sokolniki Exhibition and Culture Centre saw the celebration of the first anniversary of the Contemporary Museum of Calligraphy, a private institution intensely amassing an exquisite collection of calligraphic masterpieces.

The word “calligraphy” can be translated as “beautiful writing”. However, the beauty is not always dominating here. Sometimes the sacred meaning prevails, especially as far as religious traditions with prohibitions on people’s and gods“ depiction are concerned. Koran excerpts in Arab lettering or Torah texts in Hebrew often act as icons or protective charms. For instance, special encased scrolls, called mezuzahs, affixed to Jewish household doorframes, are believed to protect the house from all evil. Such sacred writings also fall within the seeking range of the Contemporary Museum of Calligraphy. A World Famous Mezuzah listed into the Guinness World Records as the world’s largest manuscript of its kind by Avraham Borshevsky, a renowned Israeli calligrapher and artist, will blow your mind away. The museum also availed itself of some surahs from the Holy Koran and some psalms in various styles: from ancient to contemporary. The Contemporary Museum of Calligraphy has not yet established a permanent exposition; thus the collection was displayed as a temporary show, which was enough to appreciate its scale and quality. Calligraphy items from sixty countries, e.g. China, India, Japan, Iceland, and even Australia are a slightly odd sight for the modern visitors who have started forgetting what handwritten texts looked like, to say nothing of the texts executed on rice paper with a brush or on parchment with a turkey quill pen. You can even find Calligraphy on a Wing of a Fly by a Taiwan artist, which is equipped with a powerful magnifying glass.

As far as we can tell, the museum is gearing up for more. According to the presentation, new commissions have been placed and already accepted by various artists from all over the world, e.g. a Tibetan guru will take up sacred Buddhist text inscriptions. Above all, the 2nd International Exhibition of Calligraphy will hit the place this October as the next public event being the first show of its kind to be held in Moscow.