The International Exhibition of Calligraphy St. Petersburg set up by MEC Sokolniki under the direction of Alexey Shaburov (Moscow) and the National Union of Calligraphers of Russia

The greatest exhibition worldwide that ever took place was to be seen from September 16th until September 21st 2008 in St. Petersburg (Russia). To participants from Russia, Belarus, Ukraine, China, Japan, Taiwan, India, Israel, Jordan, Armenia, Persia, Syria, Tatarstan, South America, Australia, the USA, Turkey, Iceland, Finland, Norway, Belgium, the Netherlands, Italy, France, and Germany was given a marvellous place to present their work to a large section of the public. Over the six days of the exhibition was visited by around 25 thousand visitors, some of them had a long journey to see that large cultural event. A light and laser show and classical music was set up during that fantastically designed exhibition. In one of the two large halls of the "Repin St. Petersburg State Academic Institute of Painting, Sculpture and Architecture" from the Renaissance period with paintings and sculptures from this epoch the Russian and Latin Art of the Letter was presented, in the other hall the Hebrew, east Asiatic, Indian and Russian Calligraphy. 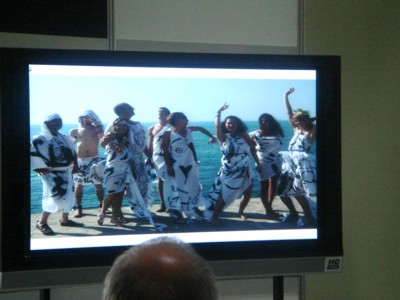 The entire first floor of the "Repin St. Petersburg State Academic Institute of Painting, Sculpture and Architecture" was dedicated to the largest show ever in the Art of Calligraphy. Ten Radio and Television teams filmed and photographed around the clock, made interviews with the organizers and the participants as well as live broadcasts. 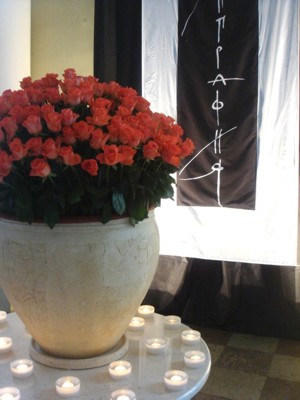 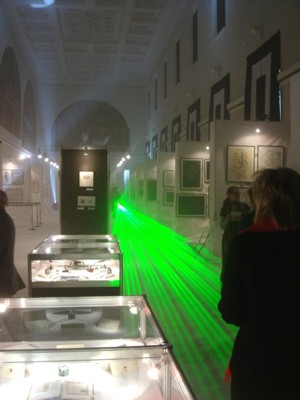 Gigantic buckets of roses decorated the entrance of the exhibition, and two electronic pianos automatically played classical music. In the exhibition were not only shown works from over 60 participants, but also a large overview of writing tools, literature about calligraphy, letters applied on plates or on tiles as well as in metal, and also artist books or historical documents of the Russian or Byzantine culture were presented. Among the texts an original letter by Catherine the Great was found. In addition to the exhibition programme an exhibition of student works and a calligraphy competition for children was organized. 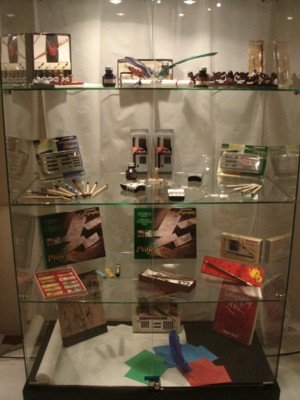 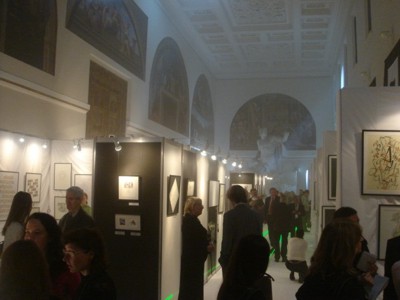 Each day the exhibition halls were crowded like in these pictures. 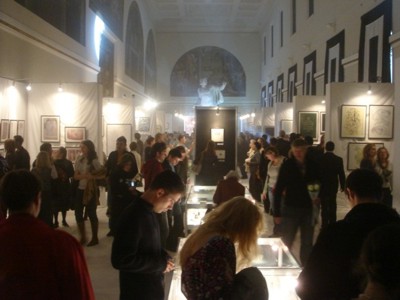 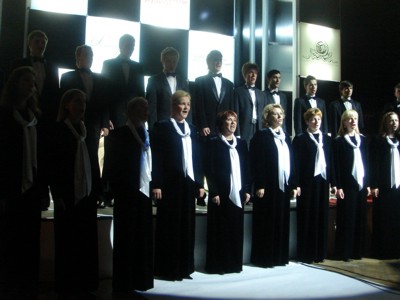 At the graceful opening ceremony a concert of the highest quality was heard, and among other groups we saw the "Chamber Choir of the Smolny Cathedral" from St. Petersburg who sang Russian literature and at the end the Russian National Anthem. Professor Pavel Semchenko from Minsk (Belarus), a famous teacher and lettering artist in his country and abroad was presenting his work, for example an approximately ten meter long scroll he inscribed calligraphy on for his 70th birthday he will celebrate this year. 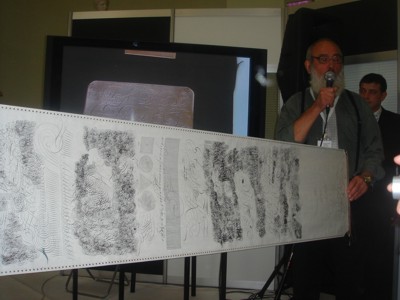 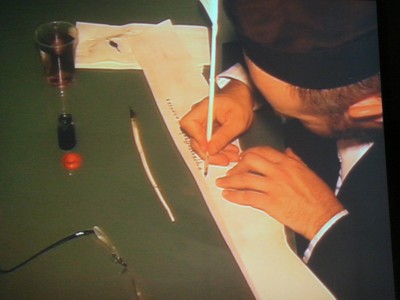 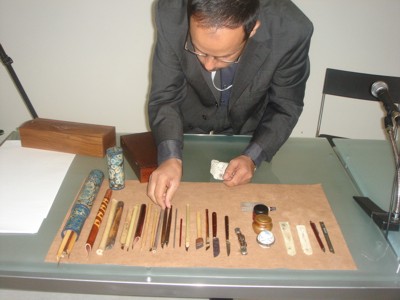 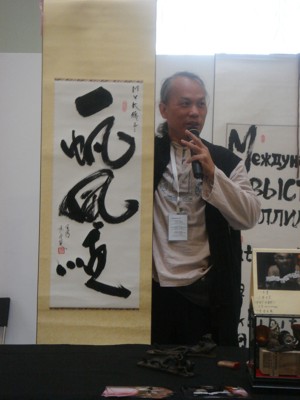 Chen Fong-Shean from Taiwan was not only demonstrating Chinese calligraphy at a very high level but also showed miniature calligraphy on books and sculptures. He is a miniature painter too and leads a museum of miniature painting in Taiwan.
The meeting of the different cultures: Izzy Pludwinsky from Jerusalem (among other he works for the St. Johns Bible), Ganzorig Aleyksander from Ulan Bator (Mongolia) and Katharina Pieper standing in front of the powerful work of Ganzorig. 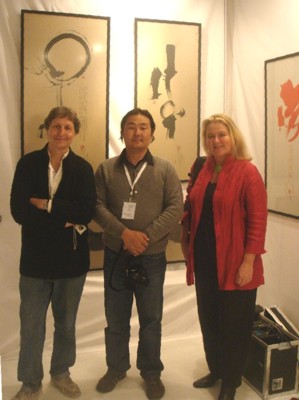 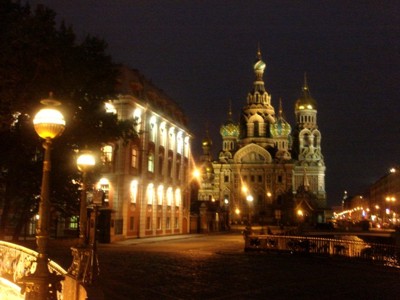 An excursion programme was organized to show the beautiful city of St. Petersburg, the participants were shown many cultural highlights of the city.
On the last day of the exhibition all organizers of the exhibition and the calligraphy congress presented themselves, and specially the leader of the project, Mr. Alexey Shaburov was celebrated. In the background we see a large wall which was painted and inscribed during three days by Andrea and Volker Wunderlich from Bayreuth (Germany). A real focus point for the public! 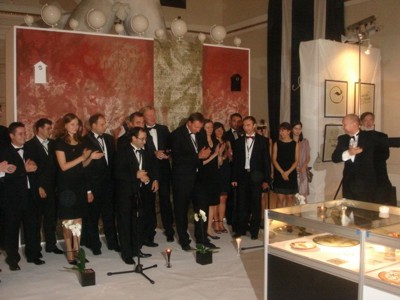 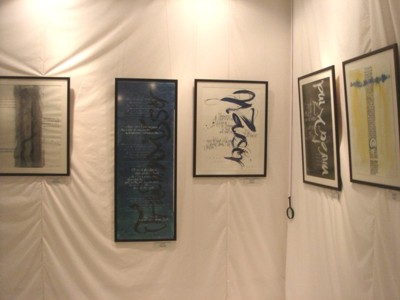 The works of the exhibitors were presented in this way to the public, and especially young people and school classes as well as visitors of all kinds of people were highly interested in the works. Next to the calligraphies there were magnifying glasses to have a precise look at the works - like here on the right side for the fine Copperplate work of Jean Larcher (Paris). In the left hand picture and on the left in the right hand one you see the works of Katharina Pieper. 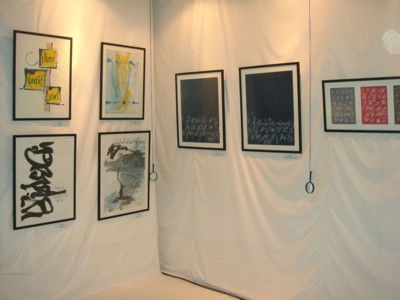 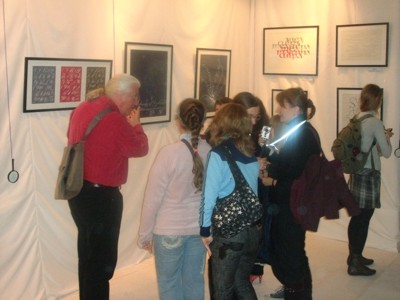 Jean Larcher is explaining his work to young visitors. On the right wall you see a part of the work of Prof. Werner Schneider.
Achyut Palav from Bombay was demonstrating a large scroll in front of the public - an excellent expressive work. His colleague Manohar Desai was supporting him during his lecture about the variety of Indian culture of calligraphy. Achyut and Katharina have been friends for 22 years. 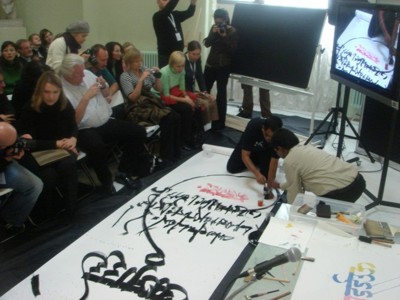 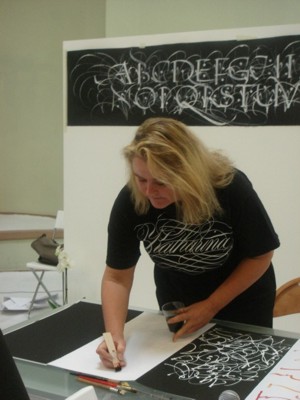 During the whole congress about 25 calligraphers, teachers and scientists from all over the world were holding lectures and were doing demonstrations. The participants as well as students and the interested public could see very different methods of presentation. On the left side Katharina Pieper is showing how letters can be done with simple selfmade writing instruments like here from Balsa wood. Together with Jean Larcher she was doing a performance "by four hands" on a concertina book ("leporello").
On the right hand side you can see a work of Leonid Pronenko (Krasnodar, Russia). 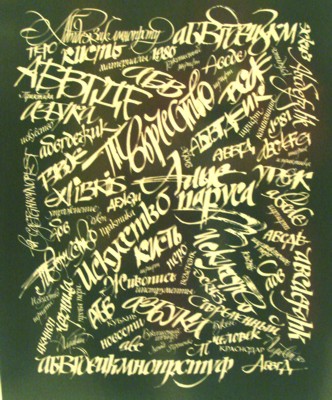 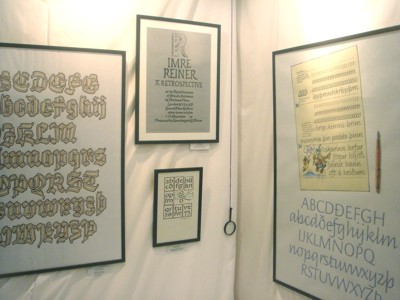 Gunnlaugur SE Briem (Iceland/San Francisco, USA) was demonstrating that letters can reach an extremely high level with the help of a computer, not only in his work he exhibited but also in a very well done lecture. On the right hand side you see a work from the student class of Prof. Petr Chobitko (St. Petersburg). 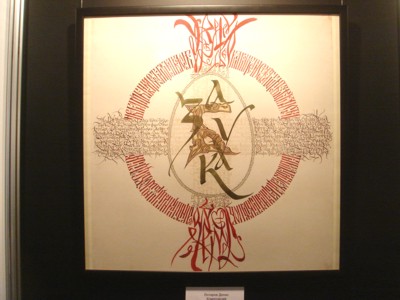 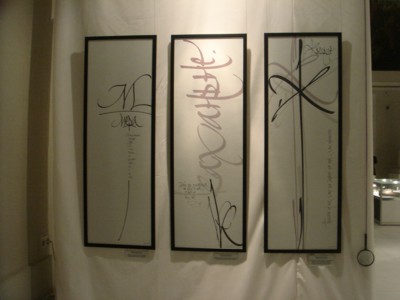 Genady Matsur, book designer and calligrapher from Minsk and former student of Prof. Pavel Semchenko, was exhibiting expressive works in large size.
Students of Prof. Evgeny Dobrovinsky who show that calligraphy can also become dresses when done on a fabric during archaeological studies!