Present-day digital technologies can make people forget how to write and even think! Fortunately, there still are some eternal values in this chaotic world. Coming to the International Exhibition of Calligraphy held at the Academy of Arts in St. Petersburg it is easy to believe that there is no business without studying calligraphy. Our journalist interviewed two people who initiated and organized the show: Alexey Shaburov, Director General of MVK International Exhibition Company, Director of the Contemporary Museum of Calligraphy and Petr Chobitko, Chairman of the National Union of Calligraphers, member of the Russian Union of Artists. 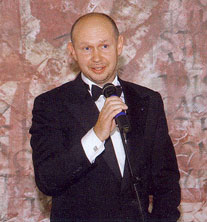 Alexey, you have launched a unique exhibition. If I am not mistaken, some international exhibitions for calligraphy are organized in other countries but there were no such shows in Russia before?
— I don’t remember any. And I wonder why nobody has done anything of the kind yet. There were some regional exhibitions in China, Japan and the USA. The exhibition in which was advertised as international turned out to be purely Italian.

— MVK is a large international company with a profound experience in the organization of commercial exhibitions. Were you afraid of a possible fail of this unusual project?
— Of course, it was a difficult, responsible and sometimes even risky affair. But it is pleasant to try something that nobody has ever done before.

— What is the future of your exhibition? Will it tour Russia and the world?
— We will bring it to Moscow. Everything is settled down; we only have to pack the exhibits. Some foreign galleries and associations got interested in the project, though we are yet at the beginning of the negotiations.

— This summer in Sokolniki, Moscow, the Museum of Calligraphy was opened. Our magazine covered the event. How long have you been preparing for its opening or did the idea spring up during the exhibition preparation?
— The decision came rather spontaneously. While we were preparing for the exhibition, the artists kept on granting their artworks. I was wondering what to do with them. Shall I hang them on the wall in my house? (What I actually do with pleasure).  However, when the number of works exceeded the reasonable amount, I thought of exhibiting them. But it is impossible to hold the International Exhibition of Calligraphy all year round.
And once in the morning I just thought: hang it all, why not make a private museum!

— How are going to replenish your collection?
— Well, by now 24 participants have expressed a wish to grant their works to the museum. I hope they will not change their minds.

— Two absolutely unique organizations the Contemporary Museum of Calligraphy and National Union of Calligraphers were established in the course of the work on the International Exhibition of Calligraphy. What is the aim of the Union??
— The aim is quite simple. Any association or union is established to promote, develop and represent the interests of its members in the state structures. According to the Charter, foreign citizens also have the right to join the Union. And many of them have already applied for entry.

— Does the National Union of Calligraphers plan to open its own schools of calligraphy?
— In fact, there are quite a lot of schools now and they function well. We would like to establish a special centre where the calligraphers can give master classes. We also plan to open a specialized library for schoolchildren.

— There is still much to do. We wish you good luck. And the last question here: what is calligraphy for you, a kind of art or merely beautiful handwriting?
— A thought, word and hand make up an integral unity. It is an opportunity to influence one’s destiny! This is what calligraphy means to me. 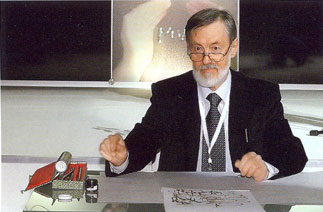 What attracted you to this project? Do you think it is interesting and significant?
— Most people have forgotten what calligraphy is, and some of them have never heard of it. When they first called me and told me about the project, I thought it was a voice from some other world, or a trick. Though it was not the 1st of April, they first called me in December. I think the exhibition was really prominent. Moreover, it was a good platform for useful and sometimes unexpected meetings.

— Did the communication between the calligraphers do them any good? The exhibition gathered representatives of different cultures, traditions and calligraphic techniques.
— It is impossible to ignore the achievements and views of the others in this globalized and varied world. In this respect calligraphy is exposed to new trends and forms. For instance, today I have given master classes on the Old Russian script. After the class the Hindu, Chinese and Arabs came to me. It may seem to be strange, but they turned out to learn a lot of interesting and useful things.

— What is contemporary calligraphy? Is it a kind of art or just neat handwriting?
— Calligraphy is a style of life. Any person practices calligraphy when he handwrites something. The mistakes on paper are as difficult to correct as the mistakes on paper. Calligraphy in this sense teaches us to live, and it is not by chance that in Asia they call it the “art of living”. If one has written something down, it means one has revealed his soul. If one doesn’t like anything there is a chance to rewrite and change it. These are not empty words: some of my students found out they could solve life problems with the help of calligraphy.

— At the exhibition we see genuine masterpieces. And does a calligrapher do this every day?
— The rhythm of life nowadays is just crazy. A calligrapher can normalize his heart rate and blood pressure in 15-20 minutes. Instead of worrying about the wrong words said or anything that wasn’t said, just take a pen and feel peace in your soul. By the way, the Chinese and Japanese practice calligraphic therapy. When I used to speak about it in my time many people thought I was simply obsessed with calligraphy. But I saw with my own eyes how people change after such studies and feel better.

— Can one earn money with calligraphy?
— A well-done calligraphic work in Asia is valued as an artwork.  Though, to tell you the truth, there is no calligraphic profession now.

— The National Union of Calligraphers was established in the course of the project. Why is this event important for you personally?
— I am afraid only time will tell how important it is. Our Union is an attempt to consolidate calligraphers. Calligraphy needs the environment to exist and develop. I think the mission of the Union of Calligraphers is to create this environment. The Chinese think that before one starts studying science or art, it is necessary to learn the art of calligraphy. It is the basis which prepares a person for future life. Calligraphy can teach people to be concerned, patient, concentrated, accurate, hard-working and attentive.