In Moscow State Institute for International Relations there has taken place the presentation of a unique project – “International Calligraphy Exhibition”. The very exhibition will take place in September in St.-Petersburg. But its Moscow rehearsal gives a lively idea of an awesome sight expecting us in several months. 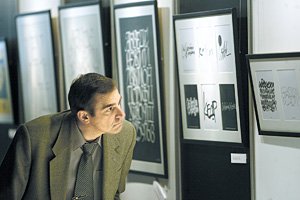 From sense to symbol

International Exhibition Company MVK, supported by the Association of Graduates of Moscow State Institute for International Relations and by Bolshoy Theater, has represented for the first time in contemporary Russia the exposition of works of the most famous calligraphy schools from all over the world. There was represented Slavonic writing from collections of calligraphers from Europe, Baltic States, the USA, Israel, China, Japan, Syria, and the United Arab Emirates. Contemporary hand-written masterpieces of leading calligraphers from Russia, Belorussia, and Ukraine are shown side by side with the beautiful museum specimens of hand-written texts – rarities of the X-XVII centuries.
“Our plan,” – emphasized the initiator of the project, the Member of the Association of Graduates of MSIIR and Director General of the International Exhibition Company MVK Aleksey Shaburov, - is to revive the most ancient art of the fine writing, development of calligraphy as one of the most poetic and inspired means of teaching morals, to pass traditions, to favour the spirit and cultural perfection of the great nation.”
As it has become known, organizers of the exhibition are preparing a super surprise – a hand-witten calligraphic edition of Constitution of the Russian Federation. If everything is all right and if one does not face any difficulties the edition is expecting to be given personally to the President Medvedev. However the exposition can be seen not only in St.-Petersburg. In October it will take place in Rostov-na-Donu, and in December in the building of the State Duma in Moscow.
The great number of calligraphers from Belorussia and Ukraine is really amazing. Some of the works just dazzle the audience. I would like to point out only one of them – Ruslan Naiden – a calligrapher from Belorussia. His work “Autographs”, consisting of five sheets of paper, is five phases of metamorphosis of a simple signature into a certain resemblance of “Black square” and vice versa. It is like cloning of the same hand-written letters with the constant addition of new senses in each phrase. Simplicity of ideas, dynamics and titanic scrupulosity produce a really tremendous impression.
It is hard to tell about works of artists-calligraphers. One should see them with his/her own eyes. “Calligraphy is music not for ears but for eyes.” Here are the names of some calligraphic texts represented at the exhibition: “Dance of Letters”, “Magdalene in a Desert”, “Love”, “Utopia”, ABC Song…
More over the art of calligraphy is a some kind of fine motor skills which allow passing the potential of a home and world culture right to the brains of a child. However, as organizers of the exhibition say, the art of calligraphy gives an opportunity of human personality development at any age.”
“If words come to an end, the sense lasts forever...”