Pandemic in Calligraphy: Japan Announces the Kanji of the Year 2020

Japan has an annual tradition to pick the main character - the symbol of the past year.

The kanji is then written with a large brush on the vertically installed canvas following all rules of calligraphy. On Monday, December 14, the Kanji of the year was selected.

Chief Buddhist priest of the Kiyomizu Temple (Kyoto) wrote the character "mitsu" meaning "close, dense". The choice stemmed from the recommendations of health professionals to avoid closed spaces, crowds, and close contacts during the pandemic of the coronavirus. That's why the expression "three mitsu"("sanmitsu" or "mitsu-no mitsu") that refers to three ways of protecting yourself against infection became popular in Japan. The ceremony of choosing the symbol of the year aired on NHK.

The tradition started in Japan in 1995. 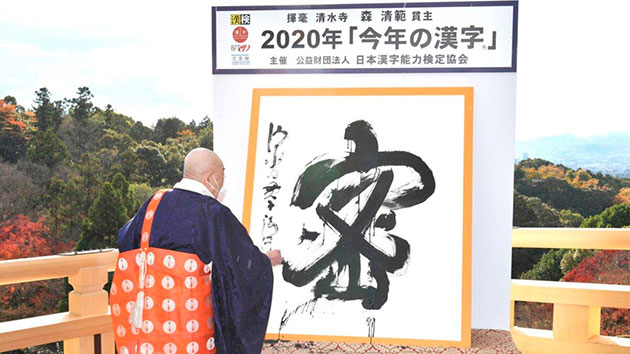 Pandemic in Calligraphy: Japan Announces the Kanji of the Year 2020