The exhibition collects 108 pieces by 92 renowned calligraphers from the three countries, and will be on displayed from July 3 to September 30 on the website of Chinese newspaper People's Daily.

The exhibition's theme, "Like the mountain range that stretches before you and me, let's share the same trials and hardships together," adapted from a poem written by Tang Dynasty poet Wang Changling, also appeared on the packaging of masks donated by one Chinese foundation to Japan.

"The coronavirus is still spreading worldwide, which has brought serious impacts on people's lives, health, safety and normal work production. The virus has no boundaries, and the epidemics do not distinguish between races," Lin Songtian, president of the CPAFFC said at the opening ceremony, adding that mankind is a community with a shared destiny; only through unity and cooperation can the whole world overcome the COVID-19 pandemic, and this is the only correct choice in line with fundamental interests of people from across the globe.

Lin Songtian stressed that distant relatives are not as good as near neighbors. "China, Japan and South Korea are important neighbors. In the process of fighting the pandemic, we have been firmly cooperating and supporting each other, which shows the spirit of unity and sets a great example for cooperation in prevention and control work across the world."

Su Shishu, chairman of the Chinese Calligraphers Association, collaborated with other famous calligraphers from China, Japan and South Korea to create artwork, and had discussions via online video calls to interpret the meanings of the works. They jointly expressed their earnest expectation for peace and friendship among the three countries.

"China, Japan and South Korea are living within a shared cultural circle, and the calligraphy has a long history for cultural exchange. As calligraphers, we are willing to gather the consensus of mankind's shared destiny, and inspire people from East Asia and the world to overcome the pandemic together as soon as possible," Su noted. 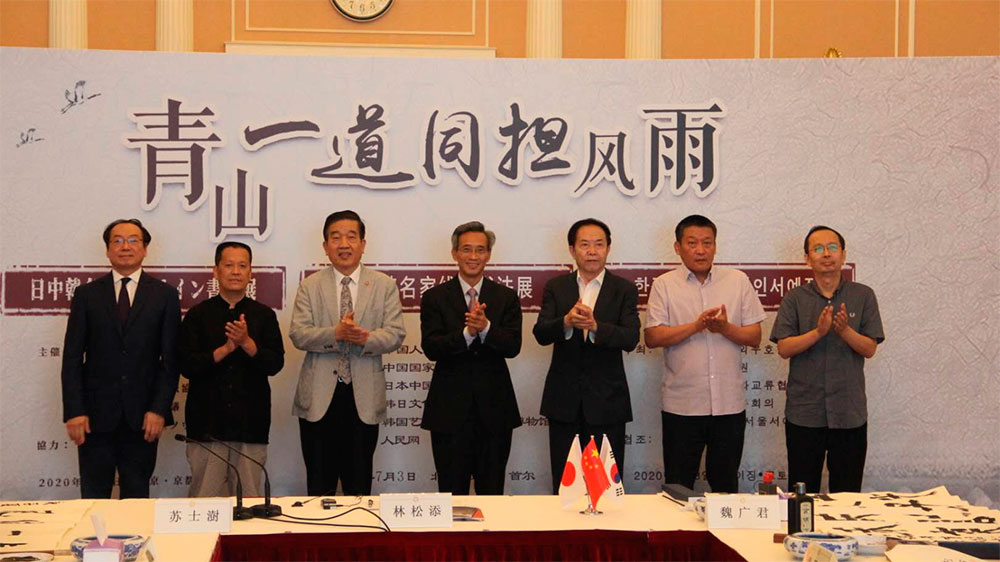