On January 28, 2019, which marked the 155th anniversary of the birth of famous Chinese artist Qi Baishi, the Culture and Information Center of the Russian-Chinese Friendship Society and the Institute of Far Eastern Studies of the Russian Academy of Sciences held a poetry evening. It was attended by Curator of the traditional Chinese painting section of the "The Great Chinese Calligraphy and Painting" exhibition Anna Donchenko, who delivered a lecture and presented her works.

Anna is a fellow at the Institute of Far Eastern Studies of the RAS and has been engaged in traditional Chinese painting and calligraphy for many years. In 2014, thanks to the support of the Russian-Chinese Friendship Society, First Deputy of the Russian-Chinese Friendship Society Galina Kulikova, and Chinese Ambassador to Russia Li Hui, she was chosen for an internship program at the China Academy of Art in Hangzhou. There, she completed a full one-year course in Chinese painting and calligraphy.

She continued to perfect her skills at the Academy of Blue-Green Landscape Painting, where she spent March of 2017 and August of 2018, learning from head of the Academy and famous Chinese painter Gu Daming. Meanwhile, she did an internship in Jingdezhen, where she learned the art of porcelain painting.

Over the past few years, Anna has taken part in more than 20 exhibitions in Russia, promoting Chinese art. Her genuine passion for China, its history and culture, help her explore new facets of the Great Chinese art and encourage cultural cooperation and mutual understanding between the peoples of Russia and China.

The program commenced with a welcome address from First Deputy of the Russian-Chinese Friendship Society Galina Kulikova, who acquainted the audience with Anna's artistic journey and wished her new achievements in painting.

In his speech, Chinese Ambassador to Russia Li Hui noted that China-Russia relations are at their best now and said that the anniversary year, which marks 70 years of diplomatic relations between our countries, will certainly help bring further strengthening of friendship and mutual understanding between the nations. He was highly complimentary of Anna's works and wished her new artistic achievements.

Anna told the guests about the artistic path of great Chinese poet Qi Baishi, his influence on the development of modern Chinese art, as well as the large-scale exhibition project "The Great Chinese Calligraphy and Painting", which is scheduled to be held in September 2019 in Sokolniki. The mastermind behind the project is Director of the Contemporary Museum of Calligraphy Alexey Shaburov. The exhibition will feature works by famous Chinese calligraphers and painters from all the country's provinces. In the lead-up to the exhibition, a number of activities will be held to acquaint the Russian audience with traditional Chinese culture.

The nearest event designed to celebrate the 70th anniversary of the establishment of diplomatic relations between Russia and China will be an exhibition of Anna's Chinese painting and porcelain with her original design. It will run from February 17 to March 14 in the cultural centre "Zelenograd".

On behalf of the Contemporary Museum of Calligraphy, its representatives, Ludmila Kulanina and Irina Kornilova, who were also present at the event, congratulated Chinese Ambassador to Russia Li Hui on the coming Spring Festival. 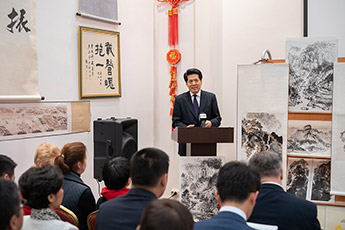 The Ambassador of the People's Republic of China to Russia, Mr. Li Hui makes a speech 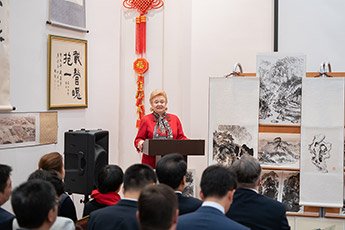 Galina Kulikova, the First Deputy Chairman of the Association for Russian and Chinese Friendship 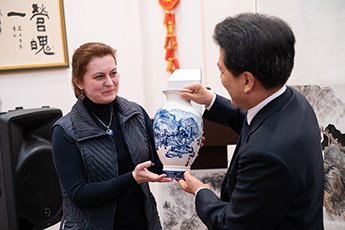 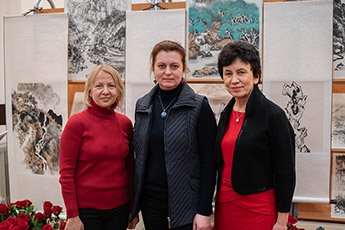 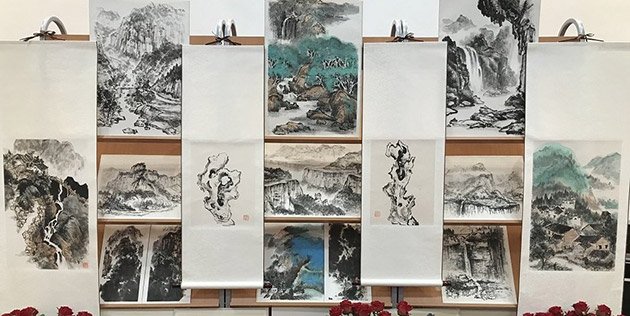