Michael Sull: The Beauty and Personality of Handwriting

One of master penman Michael Sull’s favorite things to write is people’s names.

“Because so many people can’t write their names! They scribble their names. You scribble your name, you’re showing a lot of disrespect for yourself. I mean, your name is your most personal form of identification. You’ve had it since you were born. And you should write it well,” Sull said.

“In the old days, if you wrote your name well, you were really admired; people could tell if you were a cultured person, that you cared about who you were, it showed about your education, there was a sense of identity. Today nobody thinks about that, and it’s a shame.”

“So I love to show people how beautiful their names are,” Sull said.

Sull is credited with the revival of Spencerian script—cursive handwriting—rescuing the American style of writing from near extinction.

“There have been hundreds of times—I’ve been doing this for over 40 years—when I write people’s names and tears come out. And it’s not me, it’s just this style brings that out because it shows them how beautiful handwriting is, how beautiful their name can be, and nobody does it anymore,” Sull said.

When you converse in person, there are a million little visual cues to take in, Sull said. And you might think that’s lost in text correspondence, but it’s not if you know how to really write. The beauty of Spencerian script, with its nature-inspired curves and room for freedom and embellishment, is that it makes handwriting the act of translating your human thoughts and emotions into visible language.

Sull’s own great passion for handwriting has inspired a movement, to his delight.

“You’ve got to be a little crazy to do what I did, you know. I wrote a 600-page book, and when I was done, I was $100,000 in debt and had to declare bankruptcy. And I didn’t care, because that wasn’t important to me. Money comes and money goes,” he said.

“And yet, that’s the way your passion really drives you to do these things. And people see that, and it’s catching. They become part of that with you, and then it enters their life.”

His one-man mission slowly bore fruit; Sull took on students, who then took on students, and now with social media, his work has spread all around the world in an instant, and the interest is only growing. People find so much beauty in this traditional handwriting style they are brought to tears, even in places where a different language is used. Sull’s book has been translated into Chinese, for instance, which has nothing resembling Latin letters. 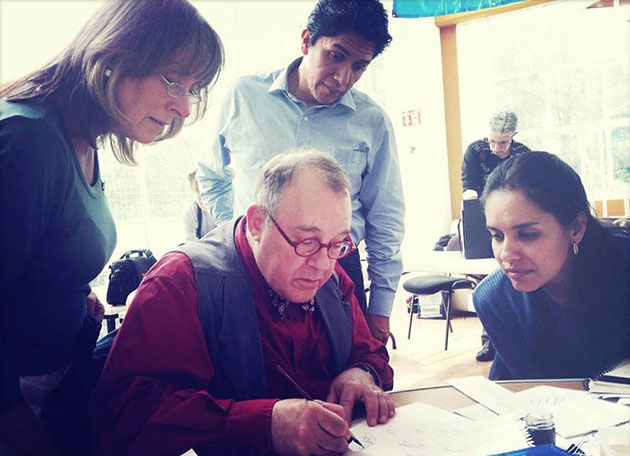 Michael Sull: The Beauty and Personality of Handwriting