You can learn a lot of interesting facts in our museum. Each item has its history and its purpose. Even such a seemingly simple thing as a bench is actually not so simple.

Benches in the Russian izba

The Russian izba had its own feng shui. The living space was strictly divided into designated zones, and items were placed according to a set of rules. For example, building a stove in the wrong place was believed to bring bad luck to the house.

The benches in izbas only looked similar from the outside. For example, men and women were not allowed to sit on a short and a long bench at the same time. So, what kind of benches were there in izbas?

They were conventionally divided into several types:

– long bench — stood out by its length. It was considered a place for women to do embroidery, knitting, etc.;

– short bench — men sat on it at mealtime.

– kutnaya bench — was placed near the stove and served as a storage place for buckets of water, shelves for dishes and pots.

– doorstep bench — was placed along the front door wall. It was used as a kitchen table;

– sudnaya bench — was higher than the others. Served for storing shelves for pots and dishes.

– konik — а wide square-shaped men’s bench decorated with a horse’s head carved on the side. It was located near the door. Men sat on it to make small crafts, so there were usually some tools stored under the bench.

– “beggar” bench, which was also placed at the door. Any guest who entered the izba without the owner’s permission could sit on it. It had to do with the rule that the guest was not supposed to go past the matitsa tie beam (the log that gives support to the ceiling). The matitsa looks like a beam installed crosswise the ceiling boards.

The museum is a member of the Association of Private and People’s Museums of Russia. 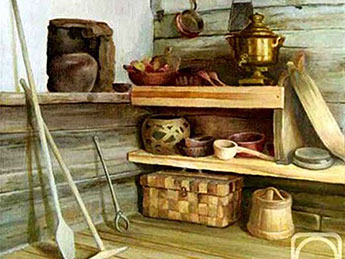 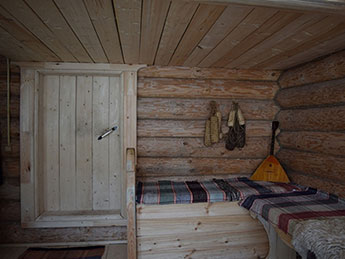 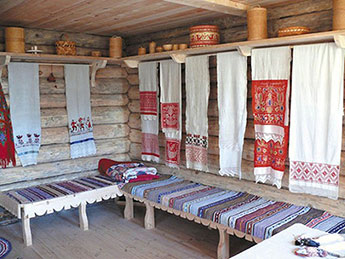 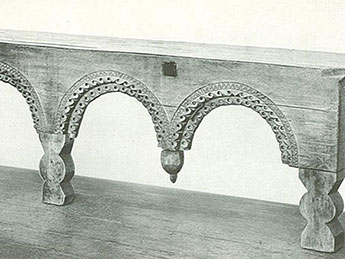