The Iraqi artist and renowned calligrapher Hassan Massoudy is at home in Paris quietly reminiscing. Now well into his 70s, and having not returned to Iraq for 50 years, he can be excused the odd moment of nostalgia.

Massoudy has spent a lifetime creating art that, despite its break with tradition, continues to express the beauty of Arabic calligraphy. He has taken individual letters and words, constructed them as huge sculptural works, and developed his artistic practice through the increased use of energy and speed. This has led to the creation of texts with far greater character, he says, and to his own appreciation of the importance of space. “Beforehand, I thought that the letter was the only important aspect of calligraphy,” he says. “Now I realize that the space around the letters is another part of calligraphy — the letters and spaces must work together in harmony.”

Renowned for transforming poetic texts into vibrant works of art, Massoudy may have broken with classical calligraphic tradition, but his sentences are peppered with references to old masters. In Istanbul, he met the last of the great Ottoman calligraphers, including Hamid Aytaç, and studied for a brief period of time at the Madrasat Tahsin Al Khotoout in Cairo. As an apprentice in Baghdad, he spent hours with Hashem Al-Baghdadi, considered the last of the classical calligraphers.

Although all of his work was in the world of advertising, he learned multiple styles of calligraphy, including elaborate forms such as Thuluth and Diwani, before leaving for Paris in 1969. There, he enrolled at the École des Beaux-Arts, where he produced his first figurative paintings and eventually formed what would become his own distinctive practice.

“In my calligraphy I reflect my personal state of being — my hopes and my aspirations,” he says. “I empty my soul of all its concerns, providing myself a state of inner peace. This is a state of equilibrium between the artistic process of the self and the human community we are linked to. What can an artist do against the wars and the injustices faced by individuals? I believe that an artist can make their work honestly representative of the time, and therefore a benefit for future generations. It’ll be for others to judge the quality of the artist’s work, therefore determining its longevity.”

The words he draws upon for his work are those of others, particularly the writings of poets and philosophers, including Rumi, Khalil Gibran and the Persian mystic Al-Hallaj. He also draws heavily on proverbs from around the world. In doing so, he not only creates distinctive works of art, but promotes a message of peace and tolerance — two themes that are central to much of his work. That’s why words such as ‘love’ and ‘serenity’ are sprinkled liberally throughout his work. 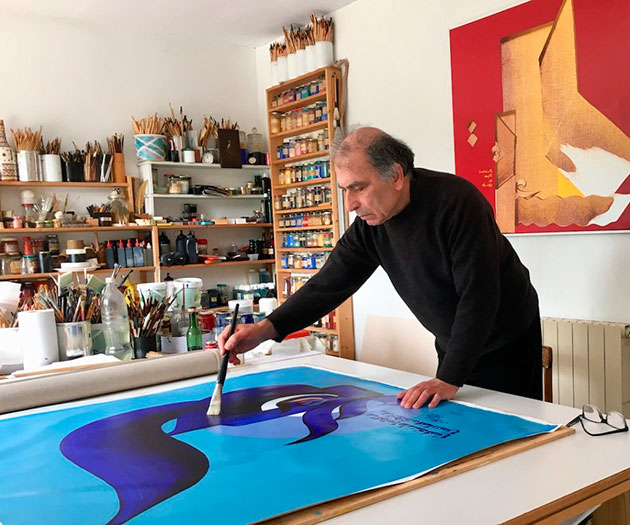