How Avraham Borshevsky Made his Dream Come True

The article on a masterpiece of contemporary calligraphy – the World Famous Mezuzah from the exposition of Contemporary Museum of Calligraphy – has been published in a new edition of the Guinness World Records 2011. Visitors to our website can read the interview with the author – Avraham Borshevsky, exhibitor of the International Exhibition of Calligraphy, a world famous sacral calligrapher from Jerusalem. The interview was published in the February issue of the International Jewish magazine Alef. 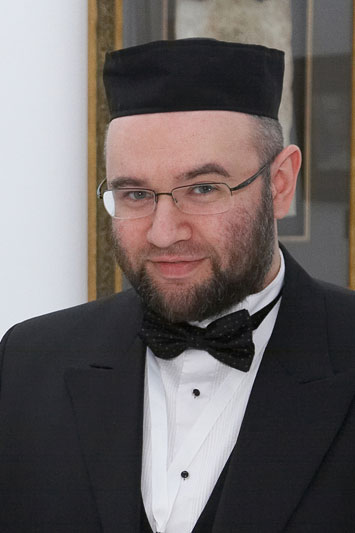 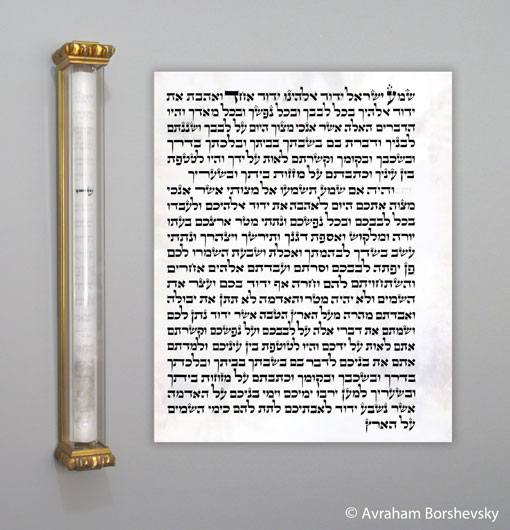 A small announcement about the World Famous Mezuzah that was listed in the Guinness World Records caught a true buzz among our readers. On top of that, the Moscow-seated exhibition of Avraham’s manuscripts that took place in the Jewish Cultural Center evoked even more avid interest towards the author of these writings. Our special correspondent met Avraham Borshevsky to find out some challenging facts about his background and work as well as about things that happened to the World Famous Mezuzah.

Avraham Borshevsky is a man with a rare walk of life. He is an artist and a calligrapher. He produces sacred texts on expensive parchments; texts that since the dawn of time have been re-written according to the Jewish tradition. He is of course a highly religious individual. Avraham has gained much success and popularity in his area. One of his works – the World Famous Mezuzah – became the one and only calligraphic entry in the Guinness World Records. The art pieces created by Mr. Borshevsky are now stored at museums and private collections in more than 30 countries around the globe. His manuscripts can be seen in a great many cities. The Jewish Cultural Center located in Moscow has seen a personal phototographic exhibition featuring manuscripts created by Avraham Borshevsky as well as his master-class organized by Joint.
Abraham lives in Jerusalem and I live in Moscow. Thanks to the opportunities offered by Skype we had a wonderful chat with this immensely interesting personality.

– You got a degree in art education at the faculty of architecture of the Leningrad Civil Engineering Institution. What made you tie your life with Torah and calligraphy?
– Hebrew sparked my interest back in the times when I was a student in Leningrad. I started going to synagogue and attend quasi legal Torah lessons, slowly but surely unveiling its magic world. Then I studied at the yeshiva run by M. Koritz. This yeshiva was a part of the Leningrad synagogue. When my family became olim khadashim in Israel, I went to the Shvut Ami yeshiva. It was the place where I got classic Jewish education, which made it possible to learn a coveted art of Jewish calligraphy from the most renowned Israeli masters. To me, calligraphy became a true synthesis of Jewish tradition and art.

– That is amazing how a person with a degree in architecture became a calligrapher of sacred texts. Had you ever thought back then that this would become your destiny?
– This might sound strange, but this was exactly what I had been dreaming about since my early childhood. Still, I could not imagine how writing letters can be a profession. At the same time it was my life-long passion. I understood there are engineers, doctors and scientists. I understood there was no place for people who write letters for living. I opted for architecture as faculty that could help me realize the gifts given me from above. It is amazing that kabbalah sees the arches in letters; the arches that make our Universe – brick by brick. All of a sudden, the year 2008 brought me to the city on the river Neva in the role of a participant of the International Exhibition Calligraphy that was taking place in the halls of the Academy of Arts at the Universitetskaya Embankment.

– In your opinion, why does a person of our times need calligraphy, when there are computers able to produce all types of scripts and fonts without any effort? Is there any sense in it at all?
– If a modern person is indifferent to beauty, mindful only of practical and pragmatic things, he or she does not need calligraphy. Calligraphy was once edged out by printing machines, as the art of photography once made all people pause to think about the meaning of painting. I believe that technological devices made the issue of the true meaning of art even more burning and quintessential. Technology helps us produce more and more things, but it cannot replace art, since art is a creation of human nature and soul.

– What does sacred calligraphy mean to you? Why do you have to be a religious person to engage yourself into it?
– This work is even more than art. It not only makes your eyes shine, but it also brings the light and the Word of God to our lives. The use of leaf gold and expensive inks is just a tool to distinguish the significance of words written on parchment. 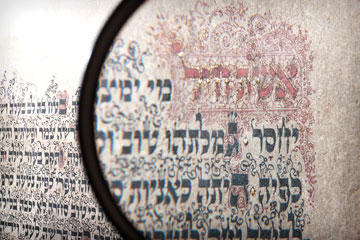 A woman of valor 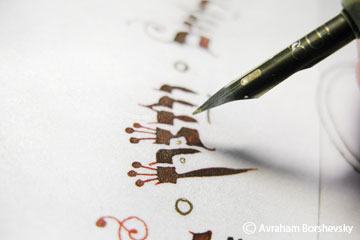 Creating a sacral work is truly a pinpoint process

– Please tell us about the way you were working on your World Famous Mezuzah, which as far as I know was listed in the Guinness World Records.
– I decided to create a masterpiece of sacred calligraphy that would bring together all the knowledge and skills I absorbed throughout my five years of studies. I chose mezuzah not only as a symbol of traditional Jewish homes but also as a symbol of Jewish calligraphy on the whole. This is the most famous manuscript in the world that has three thousand years of history. Just imagine, each and every Jewish home has a mezuzah on its doorposts. Written in the year 2004, this record-breaking mezuzah was acknowledged as a masterpiece of the Jewish calligraphy in Israel and found its place in the Book of Kosher Records.

– How did the mezuzah manage to find its way into the Guinness World Records?
– The classical requirements towards mezuzahs are highly scrupulous. For instance, it should contain 713 letters, and feature strict graphic standards of every letter no matter the size of this mezuzah. The editorial office of the Guinness World Records was rigorous enough to examine all testimonies and papers to in the longer run even launch a new section called “The Biggest Mezuzah”. The appearance of my mezuzah got massive coverage by Israeli and international media. More than six years have passed, and journalists keep asking me questions about the mezuzah. You are one of them.

– What are the real proportions of your mezuzah?
– When cased, it is one meter and 10 centimeters height. The parchment inside is 94 X 76 centimeters. This is 70 times bigger than a stretch or surface occupied by standard mezuzahs. Alexey Shaburov, Director of the Contemporary Museum of Calligraphy, took this mezuzah from the hands of the Aaron Gurevich, Chief Rabbi of the Russian Army. This museum is located in Moscow and is open on a daily basis. The natural size replica of my mezuzah is now seated in the entrance hall of the Jewish Cultural Center in the city of Moscow. 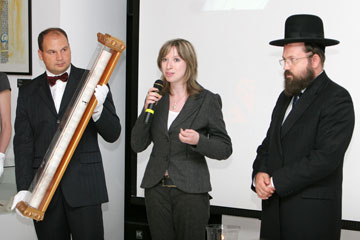 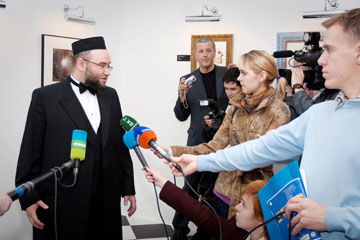 – Does the fact that you became popular only after the creation of this outsized mezuzah upset you? You produced wonderful works before this; works that made Judaism devotees and Jewish calligraphy lovers admire your talent…
– Bingo! Before mezuzah creation, my works were published in newspapers, there were TV reports about my activity, but once the mezuzah saw life, everything changed. Next year the Contemporary Museum of Calligraphy is planning to exhibit the World Famous Mezuzah at the International Sacred Calligraphic Exhibition in the Paris-located UNESCO headquarters.

– How much did they pay you for the mezuzah, if that is not a secret?
– It was difficult to put a price tag on this unique mezuzah. I suggested they should have calculated the sum and total of the numeral values of all mezuzah letters. They came up with the figure 51 361. The US dollar equivalent became the price of my mezuzah. This is equal to the price of the whole Sefer Torah. 51 361 dollars were paid to enjoy the right to possess this symbol of Jewish culture. Thus, the World Famous Mezuzah achieved another record becoming the most expensive mezuzah in the entire world.

– Who owns it?
– A Jew from Russia. He is a real devotee of calligraphy.

– I have read that your works are now located in 30 countries across the globe, even in Vatican. Who are your clients?
– My works are popular as exclusive gifts among Jewish communities. The major part of my customers lives in America, Israel, Europe, and across the former Soviet Union. This year cardinal Walter Casper became a prize winner of the Prophet Isaiah Interreligious Awards. That is how the parchment featuring my calligraphic work travelled from Jerusalem through Washington to Vatican. 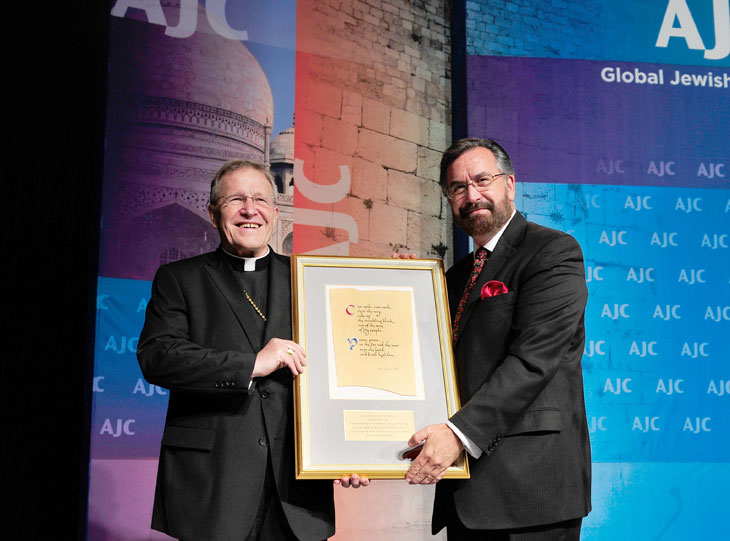 Among my clients are large-scale companies and individuals who happened to visit my Sacred Calligraphy Studio located in Jerusalem or who surfed the Internet and found my website. These people understand that the Jewish culture is first and foremost the culture of word. Quotes from Torah, psalms and aphorisms of prophets and sages are one of the most fancied presents especially to those who “have everything”. These are everlasting and timeless gifts that incorporate the Word of God.

– Well, I would like to wish you the best of luck and success. It happens once in a while when you meet a person who managed to make his childish dream come true.