Gulnaz Mahboob on the healing power of calligraphy

Gulnaz Mahboob’s search for a calligraphy master saw her land in Istanbul with “a clean palette,” she says. “I had no knowledge of the science behind it or who the masters were. I knew that I wanted to reconnect with my creative side, but I didn’t know how, where, or who to go to.”

The UK-based calligrapher and teacher traveled to Turkey in 2005. She had previously gone to Malaysia, thinking that she may be able to work there and register on art courses, but she soon learned that Istanbul was where she needed to be.

“Although Islamic calligraphy originated from the Arab world, many are now going to Istanbul because that’s where a lot of the masters are,” Mahboob tells Arab News. “They’ve perfected calligraphy to such an extent, and the standard is very high. Istanbul has become a hotspot for calligraphers.”

Having worked as a consultant for an engineering firm and later as a project consultant for the London Borough of Camden, Mahboob felt her life was missing something — a creative and artistic outlet that her work in London wasn’t providing.

“I needed to realign something inside. I was out of balance,” she recalls. “I felt a void that needed attention, because I wasn't quite fitting into the environments I was in. (I changed jobs) but the void was still there. I decided to take time off work and I had enough savings. It was a calculated risk — I knew that I could go for a certain period of time, to reconnect with my creative side, which I’d left behind a long time ago.”

Mahboob’s search took her to calligraphy master Hasan Çelebi, who agreed to take her on as his student. For Mahboob, her connection with Çelebi was about more than just his Islamic calligraphy skill.

“I was interested in what formula he had,” she explains. “It was clearly working for him because he was just completely at ease and at peace. So not only was I learning (calligraphy) from him, but I was asking him questions about his personal life: How he worked, when was the best time to practice, and so on.” 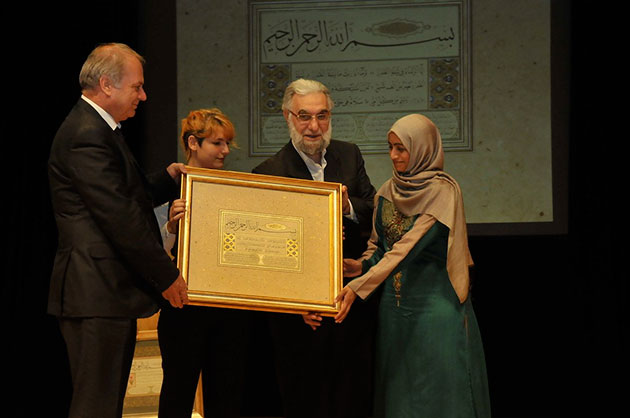 Gulnaz Mahboob on the healing power of calligraphy