Tokyo-born Fuad Kouichi Honda is widely recognized as one of the world’s top Arabic calligraphers. The native Japanese Muslim, who teaches at Daito Bunka University, has won numerous awards for his work, including at the International Arabic Calligraphy Competition. His most famous pieces use passages from the Qur’an.

Fuad began learning Arabic decades ago. Reading the Qur’an in Arabic inspired him to try his hand at Arabic calligraphy, which he describes as “music without sound.”

“Later, I embraced Islam in order to better feel the essence of this faith and to feel God,” he says. “My works are a Japanese style of expressing Islam and Islamic culture.”

His style is also a reflection of landscapes he encountered on his travels through Arab countries. Honda led mineral surveys in the deserts of Saudi Arabia for three years in the 1980s, and he says the beauty of the sand dunes and the calligraphy he saw there combined to ignite his passion for this artform.

Despite encouragement from his father, Honda was not especially keen on calligraphy as a boy. In fact, he says, he gave up studying it in favor of sports. But when he became an undergraduate in Foreign Studies at Tokyo University in 1965, Honda decided to take Arabic lessons as he was interested in ancient civilizations in the Middle East, particularly Egypt. And it was a choice he initially came to regret.

“I think (Arabic) is the most difficult language in the world,” he says. “I dropped it after two years. The teacher asked me to read a book in Arabic about the legendary Arabic hero, knight and poet Antarah ibn Shaddad. That was seriously difficult literature for me.”

It was topography that brought Honda back to the Arabic language and to calligraphy. After graduating, he joined a Japanese company that was working with the Saudi government to survey and make maps of the Arabian Peninsula.

He traveled to the Kingdom in 1974 as a translator for the company. Several of the maps the company was using bore Arabic calligraphy, and Honda says he fell in love with the art. He started teaching himself to recreate the work he had seen.

Honda recalls that one calligrapher he met, whose job was to write the official correspondence of the petroleum ministry, advised him to buy a beautiful book on Arabic calligraphy by Naji Zein, which became a major influence on Honda's own work.

When he returned to Tokyo, he continued to practice calligraphy and received requests from the Saudi Embassy to create pieces for National Day banners. Other embassies began asking for similar services. And it came to the point where Honda decided he wasn’t content to treat calligraphy simply as a side hobby. 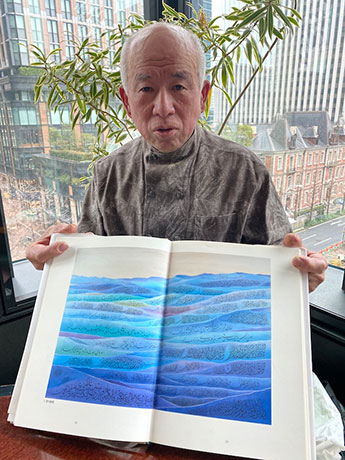 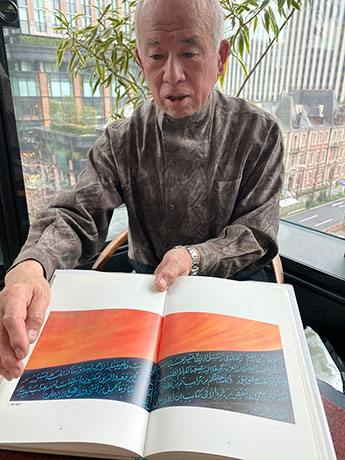