The fragrance of Indian ink and old mulberry paper fills the studio of emographic artist Huh Hwe-tae in central Seoul.

In the corner of his studio, sculptural works that he has been pursuing in recent years are laid aside.

In the mid and late 2000s, Huh attracted global attention for his “emography” – a portmanteau of emotion and calligraphy. The term was coined by Ryu Byoung-hak -- an art critic and independent curator based in Seoul and Germany who also directed the Busan Biennale in 2006 – after viewing his solo exhibition in Germany in 2006.

“Ryu came up with the term emography, saying the calligraphic letters aroused emotion,” Huh said during an interview with The Korea Herald at his studio in Bangbae-dong, southern Seoul.

For example, his calligraphic writing, “Good Fellowship,” shows Korean letters “Wu Ae (good fellowship)” which also looks like a painting of two friends putting their arms around each other’s shoulders.

Gaining popularity with the new genre – which combines calligraphy with painting and symbolism – Huh took his solo exhibition, “US Traveling Exhibition of Emography,” to New York, Virginia and Washington D.C, in 2009 and 2010.

In the recent years, Huh has moved on to sculpture, aiming to reinterpret his calligraphy in a contemporary way. 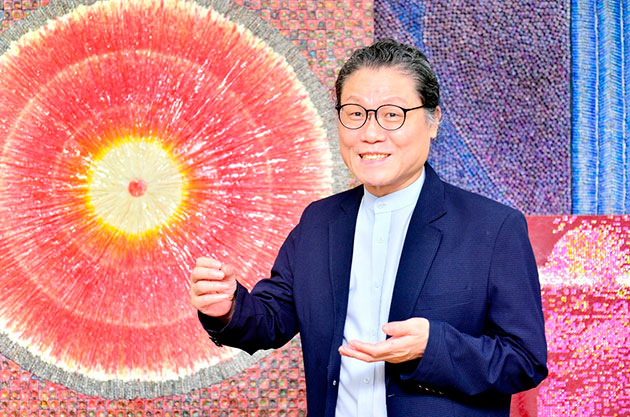