Veteran artist appeals to the government to invest in preserving calligraphy for those to come after us.

Arabic Calligraphy, an art form which emerged in the Arabian Peninsula out of nascent Islam’s need to avoid figures and pictorial references, is believed to have made its way to the subcontinent by Muhammad Bin Qasim’s conquest of Sindh in 712 AD. However, since then, calligraphy has come to fore as one of the most recognizable features of Islamic art, widely incorporated in design and architecture across the Muslim world. The art form holds a particular significance in Pakistan, a country which not only houses several historical monuments reminiscent of Mughal-era calligraphy but one which has also been home to some of the most skilled calligraphers in the world.

According to Obaid Raja, grandson of veteran calligrapher Saif Ali, he takes over the legacy of his forefathers, who have had the virtue of writing the holy Quran with their own hands. Raja, a young artist himself with a penchant for calligraphy, says he was introduced to the art form at the tender age of five and has since then dedicated over 25 springs of his life perfecting and promoting his trade. “While most children my age would spend their leisure time frolicking around our small village of Fatehpur Thakial in Kashmir, I would instead be found sitting on the cold floor of our humble abode trying to replicate the intricacy of my forefather’s letterings. That’s how I first learned to write and fell in love with the art of calligraphy in doing so,” he recalled.

Speaking about his lineage of skilled calligraphers, Obaid Raja told The Express Tribune that his maternal grandfather Raja Aziz Ahmed as well as his great grandfather Abdul Rehman Raja, were both gifted calligraphers and teachers. “My grandfather was the headmaster of a government school, who spent a lot of his time lettering the hadiths of the holy prophet as well as teaching them to his students. Whereas my great grandfather has trained thousands of young artists in the art of calligraphy,” he expressed. However, Raja’s father believes that despite his family’s generational association to calligraphy, the art of lettering has been subject to a gradual decline in Pakistan. “In the past, even a postman could read and write the Urdu and Arabic scripts with perfection but today, as the world goes digital and more and more people have forsaken writing. For a lot of us, Urdu is other mother tongue and Arabic is the language of our religious scriptures. The two languages share similar characters yet they are so neglected that many today struggle to even write Arabic or express themselves in Urdu. Sadly, these days not even the most educated of people know how to write ‘Bismillahir Rehmanir Rahim’ correctly,” he lamented.

As per Raja, the government should invest in preserving and promoting the art of calligraphy, so that those who come after us are not deprived of this historical art form. “Calligraphy should be a compulsory subject in schools across Pakistan. On our part, we have set up the Obaid Art Gallery, where we not only teach Arabic and Urdu calligraphy but also shed light on English lettering and various drawing styles not only in Pakistan but also internationally through online classes,” Raja told The Express Tribune. 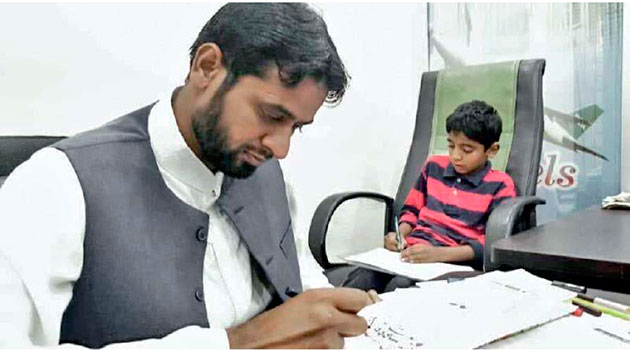