Vladimir Churov, Chairman of the Central Election Commission commented on the International Exhibition of Calligraphy 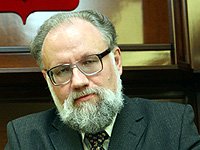 Delicately designed, the folio was unveiled on September 17th. The total number of exhibits exceeds 350 works by the elite representatives of a variety of calligraphy schools from 24 countries.

The Chairman of the Central Election Commission of the Russian Federation also announced that his handwriting is very clear and readable. “I have a so called navigator's handwriting which I was taught at navigational and hydrographic departments.” This kind of handwriting was required to fill logbooks on ships, and to make mark on maps.“ My father, a naval officer, had the same handwriting,” Vladimir Churov told.

The Chairman of the CEC also pointed out that the Constitution is often the subject to make unique souvenirs: microscopic or giant copies. Vladimir Churov also mentioned that we should not forget that 'the flag, the National emblem, the anthem, the Constitution, and the Order For the Service to Homeland of the 1st degree in special configuration are the main symbols of the Russian Federation.“

The International Exhibition of Calligraphy will delicately sail you to the world of the past as well as to present-day reality. Today’s collection has 250 exhibits. Among them are the most fascinating, yet unexplored, samples of Slavic writing, historical manuscripts of the peoples of the world, rare letters and documents, belonging to the Romanovs, the noble family of Russia, and taken from the vaults of the State Historical Museum.

Visitors will see a great gallery of rare, scarce and unseen manuscripts and miniature books from private collections. Besides these, they will see writing materials and utensils of all ages, and will be able to scrupulously examine modern original and distinct samples of applied calligraphy. In the context of the Exhibition, the organizers are holding several master classes delivered by Russian and international calligraphy experts and artists, who will be happy to offer pupils and students a couple of calligraphy lessons. All experts will be offered to visit a series of lectures.

Last but not least, the Exhibition Programme will feature round table discussions, seminars, calligraphic performances and contests for amateur calligraphy writers.

Source: The official website of the United Russia party