The trilogy “The Light of Christ. Georgia” will be presented at the exhibition of calligraphy 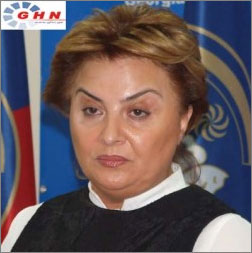 Nestan Kirtadze invited to the exhibition which is to be held in Moscow from October 14th to November 14th.

“The Light of Christ – Georgia rare edition, the illustrations of the ancient manuscripts collected in this epoch-making trilogy and reflecting the cultural development of Georgian literature are to represent Georgia at this cultural event.”

“It should be noted that the international exhibition organizers provided a special pavilion for the exhibits of extreme rarity,” N. Kirtadze said in the interview to the Agency. She also mentioned after Moscow the exhibition will be exhibited in the world centers of culture: Tokyo, New York, Paris, Jerusalem and other cities.

At the same time Kirtadaze also marked she is bringing to the Moscow exhibition a welcome letter from Ilia II, Catholicos-Patriarch of All Georgia — the Message of Peace, where he addressed to the organizers and participants.

“On the one hand it is a unique opportunity to acquaint the world with spirituality and culture of the Georgian civilization. On the other hand, in my opinion, the significance of the event makes it possible to continue the dialogue of cultures between Georgia and Russia, to never stop the cultural interaction despite the extremely tense international relations between the two countries,” Nestan Kirtadze said before the departure to Moscow.

At the same time Kirtadze expressed hope that the Light of Christ — Georgia will play its significant role in restoration of relations between Russia and Georgia.

“With the help of God the Light of Christ — Georgia will become a messenger of peace to rebuild and restore the bridges of understanding among our nations”, Nestan Kirtadze said.

The 2nd International Exhibition of Calligraphy is to be held under the auspices of the Commission of the Russian Federation for UNESCO in Moscow from October 14th to November 14th. Such a large scale event sponsored by the Contemporary Museum of Calligraphy and National Union of Calligraphers is held in Moscow for the first time ever.

The exhibition will include works by world-renowned authors. Visitors will see masterpieces of calligraphy from over thirty countries, such as: Russia, Ukraine, Belarus, Israel, USA, Japan, China, France, Italy, Germany, Australia, Brazil, etc.

Among the guests of the exhibition expected are collectors from around the world and representatives of art critics.