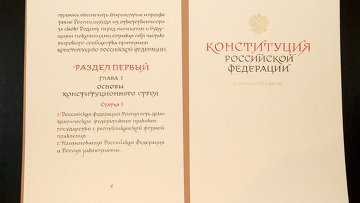 “Chinese calligraphy masters were inspired with the talent of a group of calligraphy specialists from Russia executed the first and only handwritten copy of the Constitution of the Russian Federation,” Pyotr Chobitko, Presidium Chairman of the National Union of Calligraphers announced to RIA News, Information Agency.

“Chinese calligraphers were highly overwhelmed with the tremendous talent of their Russian colleagues, observing the work on the handwritten copy of the Constitution of the Russian Federation.” He pointed out.

The presentation of the first and only handwritten copy of the Constitution of the Russian Federation took place on September 11th at the AIF-News press-center.

Presidium Chairman said that Chinese calligraphy writers had no idea that there were truly talented people, living and working outside China, who are practicing this ancient Chinese art and who are quite able to produce a genuine masterpiece. He also added that the National Union of Calligraphers will soon start working on a second handwritten manuscript to present to Dmity Medvedev, President of Russia.

Pyotr Chobitko mentioned that the handwritten copy of the Constitution has 120 pages. All pages were produced with the help of the old technique of manual casting and with the use of rag paper. All words and letters are written with Chinese ink. The core ingredient of the drafting ink is plant roots.

He also mentioned that the handwritten masterpiece was accepted by the Russian Heraldic Committee.