The Contemporary Museum of Calligraphy is opening in Moscow 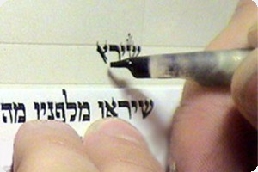 In early August Moscow Recreation and Entertainment Park Sokolniki will welcome the first Russian museum of beautiful handwriting, the Contemporary Museum of Calligraphy.

The exhibiting items include fine specimen of Slavonic and European lettering, Russian and foreign books on calligraphy, limited editions of rare manuscripts, writing utensils of the past and present, elegant Hebrew calligraphy.

For instance, the museum will exhibit the works of Israeli calligraphers Avraham-Hersh Borschevsky and Izzy Pludwinski.

Avraham-Hersh Borschevsky was born in Ukraine in 1970 and was brought up in Leningrad. He did his artistic studies at the Department of Architecture, Leningrad Institute of Civil Engineering. He became a Master of the sacred Hebrew calligraphy at Jerusalem Yeshiva.

Complying with the Halachic law, he creatively extends the Jewish ceremonial art tradition. Mr. Borshevsky has devoted himself to creating original parchment manuscripts on the basis of sacred Hebrew Scriptures from the 3,300-year-old immense spiritual heirloom of the Jewish people.

In 2004, Mr. Borshevsky wrote the unique Mezuzah parchment, recognized as a masterpiece of Hebrew sacred calligraphy. Due to its giant dimensions, this kosher Mezuzah was documented by the Guinness World Records.

The master′s works have made prestigious custom-designed gifts and are located in 23 countries around the world.

Izy Pladvinsky was born in New York in 1954.

He moved to Israel in 1978, where he enrolled in the local university’s chemistry department.

It soon becomes apparent that he has little interest in this subject. He dives head first into the world of calligraphy.

Besides taking part in various exhibitions around the world, Izy also finds time to devote himself to teaching. His book The Song of Songs, which title comes from one of the books of the Bible, is published in 2001.