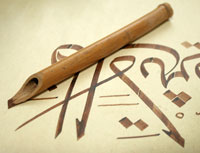 Once this art was compared to music, poetry and philosophy, then it was forgotten and considered as the subject matter akin to calligraphy. Today calligraphy combining graphic arts and painting is experiencing rapid and unprecedented rise. Renowned masters of letter lace weaving from around the world have recently gathered in Moscow. It opens the 2nd International Exhibition of Calligraphy (from 14 October to 15 November).

The unique handwritten Constitution of Russia, “Calligraphy on the fly’s wings” from Thailand, a masterpiece of sacred calligraphy on parchment Tsar-mezuzah from Israel, calligraphic carpets from Tunisia ... the unique works at the exhibition are presented by more than 100 participants from 33 countries. Among them - personal calligrapher of Pope Benedict XVI Barbara Calzolari, Nja Mahdaui from Tunisia who paints the palaces and planes of Arabic sheikhs, curator of the Old Slavonic fonts Peter Chobitko. Poems, wise sayings, prayers and expressions of contemporary artists - all made in exquisite specimens of Slavonic and European letters, in the strict forms of classical Japanese and Chinese characters, in a refined Arabic ligature, in a variety of modern graffiti options. Considering the black and white ornaments, one wonders how, for example, a string of medieval Japanese poet Basho transformed into a bunch of swaying grass or how the familiar letters of the Cyrillic alphabet gain shape of the wings of cherubs or flame in a prayer to God. Whenever one wants to see this miracle closer there is magnifying glass near each exhibit. After all, calligraphy - is not just painting the letters, it's secret symbols and signs, it is the reflection of thought, image, nature of the holder of the gift of beautiful writing.

One of the organizers of the Moscow exhibition situated in three halls of Sokolniki Park is the Director of the Contemporary Museum of Calligraphy Alexei Shaburov. Continuing the tradition of Russian patronage, he does a truly titanic work to revive the traditions of ancient art. Curiously, the museum of calligraphy appeared in Moscow already in the XXI century, in the era of domination of electronic media and the almost complete failure of the handwritten letter for transmission of information. Calligraphy is a new stage of spiritual development, says Alexei Shaburov:

“I love the unconventional approaches. Is an attempt to find something new which simply does not fit the modernity”, says Alexei Shaburov. “For me calligraphy is both an art and philosophy, and something more. My goal is to show its beauty and diversity. Any person wishing to touch the beauty can come here to obtain additional knowledge about the art of calligraphy. We do not set ourselves the task of business, so it is more of a social project”.

At the exhibition, many artists will give the master classes to the audience. After all, calligraphy is the democratic art. One only has to pick up a brush or pen, and come to a classroom where is thought slow and thoughtful breeding of letters, words, which are gradually formed in the fanciful tracery text. One can feel the entire aesthetic, emotional, and intellectual value of this art form. It is not a chance thing that the Eastern wiser heads used to say: "The beauty of a man is in the beauty of his writing, and it is even better if it is the wise man who writes beautifully".