A World Famous Mezuzah in Moscow

A presentation of a series of new artworks from the collection of sacred calligraphy, exclusively executed by the best calligraphers of the world, was held on the occasion of the 1st anniversary of the Contemporary Museum of Calligraphy since its foundation.

Alexey Shaburov, Director of the Contemporary Museum of Calligraphy detailed the museum’s history and announced the 2nd International Exhibition of Calligraphy which will be held from October 14th to November 14th under the auspices of the Commission of the Russian Federation for UNESCO.

Andrei Busygin, Deputy Minister of Culture of the Russian Federation, pointed out in his report that the Museum of Calligraphy takes a unique niche in Russia, showing inhabitants an art they barely knew.

The calligraphers Chen Wenfu, Yuri Koverdyayev and Kim Jong Chil showed some calligraphic exercises with the accompaniment of classical music. The pace of their work changed in accordance with the music. 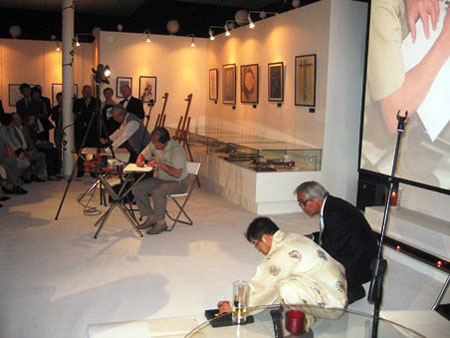 Kim Jong Chil, working till the end of the presentation, has made a whole new sample of the calligraphy art and gave it to the museum.

The World Famous Mezuzah, the only chef d’oeuvre of sacred Hebrew calligraphy, executed by an outstanding Israeli calligrapher Avraham Borshevsky was also presented to the museum. It is listed in the Guinness Book of Records as the world’s largest Mezuzah (76 cm wide and 94 cm long; the decorative case is 120 cm long). This moment has become the most memorable part of the ceremony.

The gift was presented by Elena Mogilevskaya, assistant to the counsellor of the Embassy of Israel in Russia and Aharon Gurevich, Chief Rabbi of Russia, representative of the Federation of Jewish Communities of Russia (FJCR). 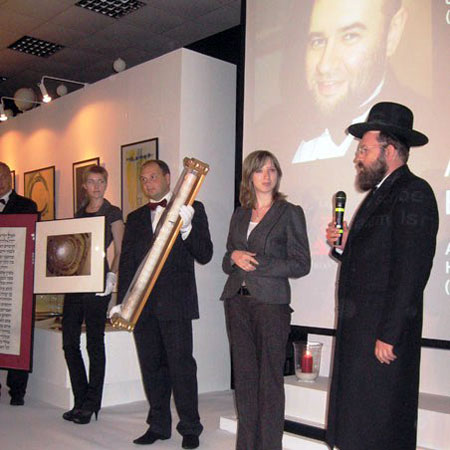 Elena Mogilevskaya expressed her delight that the A. Borshevsky’s masterpiece was to be exhibited in the Contemporary Museum of Calligraphy and shared her hope to keep the established collaboration between the museum and the Israeli cultural center in Moscow.

A.Gurevich, Chief Rabbi of Russia noted half jokingly that the World Famous Mezuzah, an amazing sample of sacred calligraphy, does not have an appropriate doorframe in Russia to affix it.

“This chef d’oeuvre will belong to the Jewish community in Russia. We now know where we can see it,” he concluded.

The collection in the Contemporary Museum of Calligraphy, established in 2008, includes 1300 exhibits from 33 countries.