Dear all, we are happy to invite you to the workshop for all ages, dubbed The Bilibin's Style Capital, which will be held on May 14 at 13:00.

Marina Khankova, author of a unique handwritten alphabet book, will present creative work and artistic methods of Ivan Bilibin, a great Russian artist, while the unique and fairy handwritten Capital will act as the outcome of the workshop.

Tools and materials will be provided

Please call if you wish to enroll:

The Contemporary Museum of Calligraphy is excited to present Marina Khankova, artist and member of the Creative Union of Artists of Russia. With one of her latest personal exhibitions held in the Museum of the Russian Icon in 2016, currently Marina is in the making of her personal exhibition in the gallery of Leo Tolstoy's estate-museum Yasnaya Polyana, which is also a state memorial and nature reserve.

Marina Khankova was born in 1977 – the golden age of that socialist era when the younger generation's culture was free of that bourgeois influence, which is so endemic today. As to all the kids of her age, her parents told her Russian fairy tales written by some of the classical writers. Being an inquisitive mind and a quick eye, Marina would absorb each and every sound of her mother’s voice telling her those bedtime stories, with her soul. And as her eyes closed, the tales were to unfold even further in her dreams, interpreted and coloured as a child’s imagination of a young artist could do.

In due course Marina discovered alphabet as every child did, and the alphabet book that came with it – that dear and good alphabet book known to any adult in the country. When she learnt to read, she would not only listen to her bedtime tales but also turn pages displaying fairy heroes, talking to them, arguing, cheering up or pitying them. Year by year and day by day an entertained child turned into an individual, original and talented artist, prone to hard work, pursuits and perfecting herself. And her tales were still there with her, unblanketed with daily routine or her own children, and free of those awkward and alien colouring manner that can hardly be called real. While Marina observed bitterly as this pretend substance displaced the true Russian, she decided to endeavour and preserve at least that part of the culture she was born and brought up in, preserve and convey part of it to her own or her friends’ children and just any other kids around who unknowingly and rapidly tend to forget their fairy heroes of the past centuries.

It then took her several years to create a wonderful Russian Alphabet Book. Having painstakingly learnt Russian visual art where she would individuate Ivan Bilibin, an outstanding Russian artist, she created and perfected her own style, yet so related to that of the talented Russian illustrator. Hard work over each line and colour every day was far from exhaustive, quite the contrary – it gave her the chance to teach art to the others. Her home-based painting and graphics school joins many members of all ages; future students also approach her to gain some creative skill. And she seems to connect to anyone, knowing that some may benefit being bolstered and the others – reprehended.

The Alphabet Book is Marina’s completed work but not the only one. Currently she is working on an interesting and vibrant topic dubbed Corners of the Native Nature, where she will tell us about simple, yet so darling, familiar and good plants as nettle, burdock, clover and hop, and will show us so well known light or thick forests, clear yet mysterious fields, so spacious and filled with heady air of herbs and flowers… In parallel Marina works on illustrations for Russian fairy tales, with the first one naturally being The Tale of the Fisherman and the Fish.

Consumed with abundance of ideas, Marina struggles to catch up to her imagination but she keeps her courage and progresses tirelessly – let us arm ourselves with patience too and wait. In the meantime we will become mindful and thankful audience contemplating this new, yet so old and familiar Russian Alphabet Book. 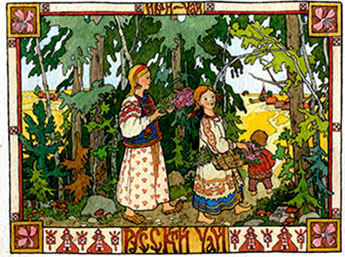 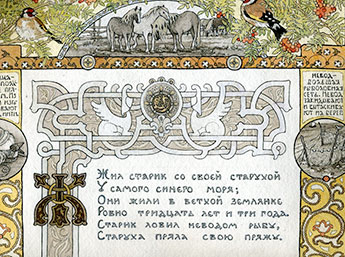