This year’s G8 summit was marked by an important event covered by the world mass media. Italian Prime Minister Silvio Berlusconi, who hosted the summit in L’Aquila, solemnly presented the heads of states with calligraphic handwritten copies of respective national anthems. President Dmitry Medvedev was given the handwritten copy of the National Anthem of the Russian Federation written by hand and beautifully illuminated.

We are proud to say the Contemporary Museum of Calligraphy and the National Union of Calligraphers took an active part in this large-scale project. Bounded by the contract with Italian officials we couldn’t serve this hot piece of news earlier.
Being the only calligraphy museum in Russia, we were asked by a famous Marilena Ferrari-FMR publishing house to create a handwritten copy of the National Anthem of the Russian Federation. This commission was of doubled importance, for Marilena Ferrari is known for making exclusive VIP presents and gifts on an international level.

Knowing our good reputation in the calligraphy world the Italians scrupulously studied our website and chose the master – it happened to be a well-known professor of calligraphy Yevgeny Drobyazin. 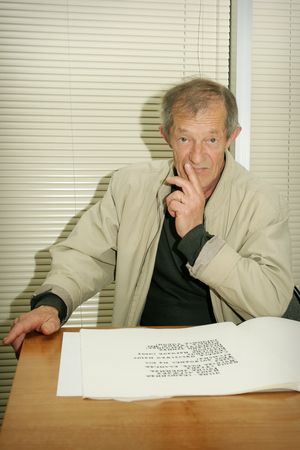 We completed our work in the shortest possible time and sent it to Rome for Marilena Ferrari-FMR. Mr. Drobayzin’s calligraphy was further illuminated by Barbara Calzolari, a world-renowned calligrapher. On July 8th Prime Minister Silvio Berlusconi presented the masterpiece to President Dmitry Medvedev.

A copy of Mr. Drobyazin’s creation will be available at the II International Exhibition of Calligraphy from October 14th to November 14th, 2009 in Moscow. 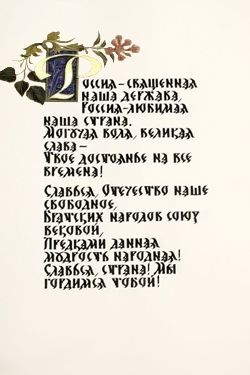