From Goldkronach to Moscow: Wall decoration at the Contemporary Museum of Calligraphy

“Our Father is for all the time!” said Andrea Wunderlich, the artist calligrapher from German Goldkronach, referring to her artwork. Together with her husband, artist Volker Wunderlich she brought her calligraphic works to Moscow.
It is not a secret that for a long time Russian calligraphy had been in isolation from the rest of the artistic world. The Internet improved the state of things, due to it the artworks of the Wunderlich couple being displayed in Moscow and St. Petersburg.
“Forming a beautiful and healthy society” was the aim of the exhibition’s initiator, Alexey Shaburov.

New technique
Art amateurs learnt about the affiliated company MVK Messen GmbH from Frankfurt at Klingspor Museum of Book and Typographic Art in Offenbach, there they also first heard the surname Wunderlich. The artist couple ideally matched the International Exhibition of Calligraphy in St. Petersburg. 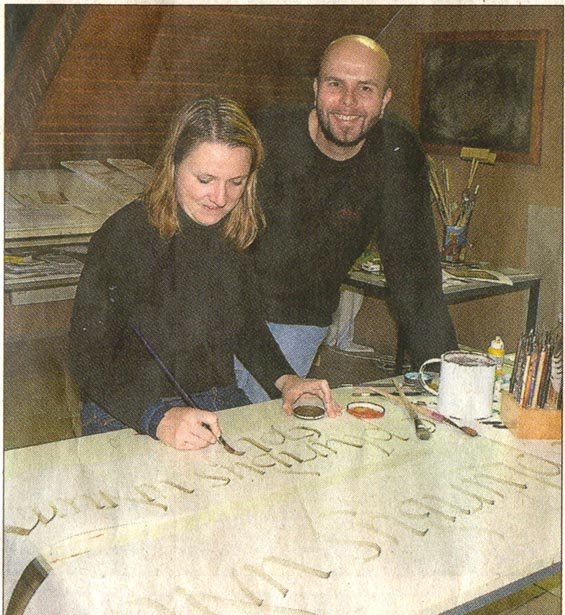 Andrea and Volker Wunderlich at their workshop in the Old fire station in Goldkronach. (Photo: Tomis Nedvidek)

They demonstrated the mesmerized Russian and foreign spectators their original technique characterized by multiple layers of transparent colours which resembled ancient church fresco paintings.
The artists’ success brought them to Moscow for the second time already. Both times they were invited by Mr. Shaburov. This time it was an invitation to the official opening of the Museum of Contemporary Calligraphy in Moscow. The dimension of the wall offered to the artists as a canvas was 4x5 m, which means this time the wall was larger than the one in St. Petersburg. From an artistic view point the task was rather difficult as far as the organizers were intending to put a fireplace window in the same wall. The calligraphic inscription offered by Mr. Shaburov said: “E pluribus unum” or “Out of many one” and symbolized the meeting of artists from all over the world. The exposition showcased the works of artists from Germany, India, Israel, Ukraine, Jordan, the USA and Russia. All in all, according to Andrea Wunderlich, the exhibition comprised the works of 60 artists from all across the world. 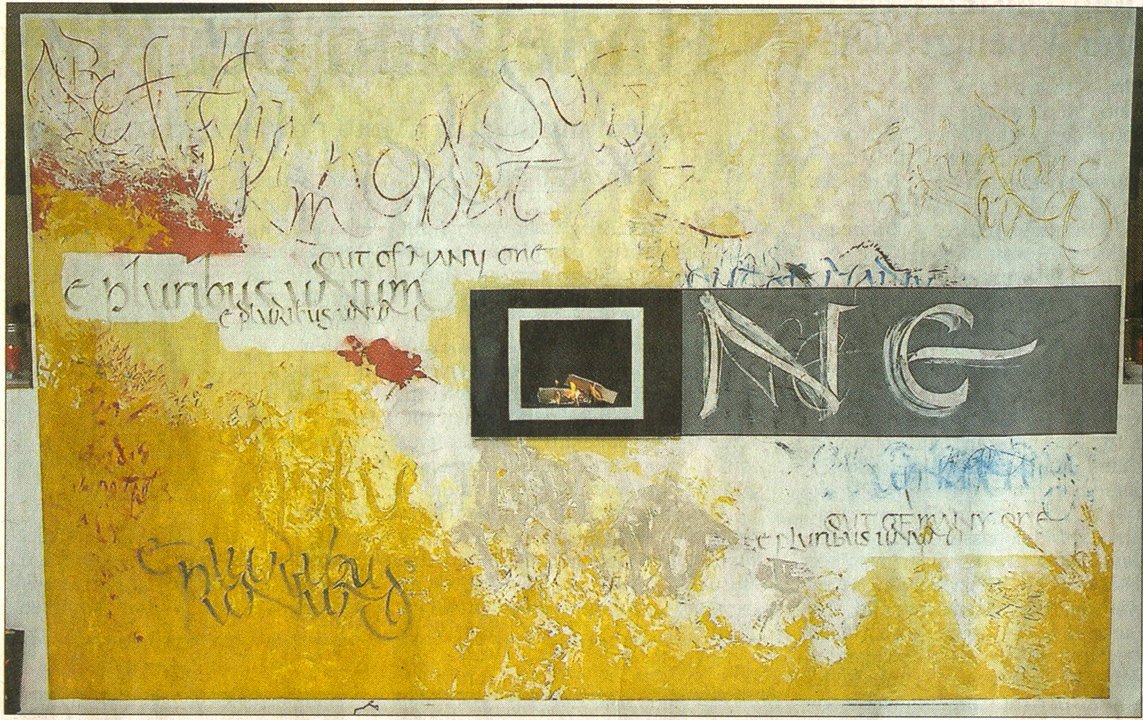 This wall at one of Moscow museums was decorated by the Wunderlichs from Goldkronach.

A reckless adventure
Demonstrating art in the country where the purchasing of necessary art materials can be a problem or customs troubles are possible is a reckless adventure. Besides, most artists didn’t speak English which made communication impossible.
“Thus, the language of art can never be universal in calligraphy”, claimed Volker Wunderlich. Variability of working materials is as multiple as variants of art concepts.
As long as some artists are studiously copying the Holy Scriptures, others like Andrea Wunderlich are focusing on large letters, perception of which embraces the whole body. According to Andrea Wunderlich, text should not be too picturesque, but it should be grasped before the art image. In this respect, it becomes clear how Andrea Wunderlich managed to decorate with calligraphic inscriptions a coffin for Dannreuther’s burial service. This theme was part of the report she made for the Russian audience during the museum’s opening ceremony.