IT WAS the most elegant exhibition we have ever seen. The exhibits and the exposition design represented “refined ink flourish on a snow-white sheet of paper”. The ultra-modern space filled with music of lines and sounds suddenly appeared in the classical interiors of the Academy of Arts. It was a surprising combination of Art Nouveau and calligraphy, one of the most ancient kinds of art.

— Aleksey, the exhibition mesmerized the audience with its beauty, elegancy and attention to the tiniest details – from a snow-white carpet to white orchids in black vases.  There so many visitors! How did you manage to attract them all?

In fact, the advertising campaign was low budget. We chose direct mailing: the invitations were sent to art schools, lyceums, and preformed data base. Preliminary registration was launched at our Web-site, that is why we could forecast the approximate number of visitors six months before the exhibition.  And, of course, people were attracted by the exhibition subject –it was the first large-scale calligraphic exposition to be demonstrated in Russia and the world. We attracted the most prominent calligraphers from across the world.

— How did you manage to do that?

First we had to decide who to invite…
I had to tour some countries. I went to China, Japan, Netherlands, estimated the state of the art of calligraphy there. I contacted the national associations of calligraphers. Our company has a lot of business partners worldwide; they helped us establish the necessary contacts. But still, to inspire people, “to turn them on” I needed a particular idea. We suggested a simple and clear one: calligraphy as a means of forming a beautiful and healthy society. And, believe it or not, people rose to the fly.

— How did the idea of the exhibition come to your mind? The exhibition projects of your company are quite pragmatic. And suddenly this “aesthetic” impulse which differs from business and market interests.

Curiously enough, everything originated from suffering. However, it must be natural – severe suffering, psychic pain turn into something good and kind.

Imagine, in the moment of psychological distress one opens a book which tells how the beauty can influence one’s mentality, psyche and self-control… In my case, the book told about calligraphy. I called the author in Krasnodar and soon we met. He didn’t persuade me; he just demonstrated his calligraphic technique and told me about the interaction of the processes of “writing” and thinking. “I understand”, said I. I let it through myself and believed calligraphy is a universal instrument which can bring harmony and beauty to the world. Later on I found the evidences of this “theory” in China and Japan where this art has deep roots. I had a chance to visit some universities and talk to professors who study the brain cortex.   They are sure that calligraphic handwriting is directly related to functioning of human brain and psyche.

— Do you mean that psychological component of calligraphy is no less important for you than aesthetic? We used to prepare a magazine issue about Chinese libraries and handwriting traditions. We think that calligraphy for the Chinese is primarily, an art.

Calligraphy for them is an inseparable part of the national culture and life. However they also distinguish between painting and calligraphy. The art where signs and images are present is called painting; the art where only signs are present is calligraphy. There is no such differentiation in Japan; they are much closer to the Europeans in their definitions. Though some Japanese schools preserved the traditions of ancient Chinese calligraphy and some Chinese go to study Chinese calligraphy to Japan. It is a different story… When you write the words “love”, “happiness”, “health”, “wealth”, write them beautifully and thoughtfully – it works.  It really works…. 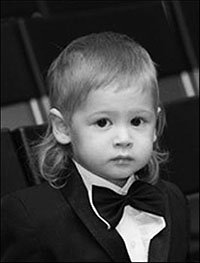 — On the ground-floor you organized a small photo exhibition which anticipates the main exposition.  There is a photo of your little son who is called “inspirer”…What is this story about?

The story is the same. It was a gloomy period. It was the time when my son was born, I delivered myself, and he was born in torture and pain. It happened so that my son and love for calligraphy came simultaneously. It was an impulse to start treating the project seriously.  Now I am waiting for a daughter Victoria…

— Do you mean that a new project is also coming?

Not to speak too soon, but there is an idea of a new project. One of these days I fly to New-York to discuss its details. But I will say nothing about its main idea yet.

— It sounds like a good tradition. How many children to you plan to have?

I want no less than fourteen… If they only let me!..

— Do you mean you are ready to launch fourteen projects?!

Exactly. It must be very beautiful… I want every other project be the continuation of the previous one, but I want the previous one to go on. We have already opened Museum of Calligraphy in Sokolniki exhibition centre. I opened the museum because calligraphers give a lot of presents which must be shown. I believe it will be a hospitable house, an enclosed and beautiful place for excursions. It will be the centre where we will invite famous artists, give master classes, the place where psychoanalysts and graphologist will help people realize their significance. I want the museum to be the collection of the best calligraphic works and the centre for promotion and popularization of this ancient art.

It is my own idea which was enthusiastically supported by my team, the people who work with me.

— For how long have you been preparing the exhibition?

The idea was first announced on December 4, 2007. We had just finished the project “North Pole”. By the moment I had already planned the exhibition concept, held the necessary meetings and negotiations. 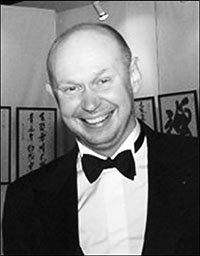 — Not a long time ago I had a chance to work at the conferences dedicated to the problems of dyslexia and dysgraphia. The number of people suffering from dyslexia is quite stable in almost all countries and equals to ? of the population, whereas the number of people having writing problems is increasing all the time. As one of the treatment methods some doctors suggested graphotherapy, the practice of conscious writing.  In your opinion, can your attempts to promote calligraphy stop the “handwriting degradation” process and create the “cult of beautiful handwriting”?

I feel rather realistic about the project and do not mean to turn the world upside down. Our attitude towards handwriting has changed, it is true. It proceeds from people’s habit to use ball or gel-ink pens and type the texts on computer keyboards. It inevitable leads to loss of the culture of handwriting. It would be too arrogant to claim our exhibition or museum can change the situation. The problem appears when a child first takes a pen or pencil. At present time too little attention is paid on it.   So we must start with the Ministry of Education. But how can one come and start the conversation there? The people who decide what and how to teach our children are very specific and peculiar. It seems unreal to me to speak about the art of handwriting and children with them. That is why, to be heard we had to start our way to the “very top”. I mean the project on creation of the handwritten Constitution of Russia.

— Was it your initiative? We thought it was a government contract like the handwritten Ukrainian Constitution.

No, it was my own idea. I commissioned the Constitution cover to Petr Suspitsyn. He approved the cover with me. Then Petr Chobitko, his students and polygraphists carried out the order. The idea and project belong to me; they do not belong either to publishers or colleagues. The handwritten Constitution was presented at the exhibition. It is when “beauty” and “governmental interest” coincided. I understand that calligraphy is an elite kind of art. But when little children come and follow the movement of pen or brush on paper and try to write something themselves my heart fills with joy and hope.

— Maybe it is a tiny stream which will soon turn into a large river. Anyway, the visitors seemed inspired with the exhibition, and children were simply steamed up.

Do not forget that handwriting and quality of a handwritten text is the reflection of one’s interior. Changing a handwriting one changes his emotional state and even life. As for the sacred calligraphy, it is exciting and mysterious, and the mystery is still hidden from us. It is important to use everything that can influence a human being, to take the best from European, Arabic and Chinese traditions…and show it to people. Who knows, may be it will stimulate a new original cultural phenomenon. For instance, we have a great karate school, and this martial art was borrowed from Japan.

— Do you practice calligraphy?

I do. For me it is a means of solving the problems. Every morning I try to write down some important things. Sometimes I have to redo it several times. The salvations and new motivations come easily to my mind. For instance, I had a problem with public speaking, but managed to overcome it with help of such studies.

— What writing utensil do you use?

I bought some nibs in Germany and use them all the time.

— The nibs we used to write with at school?

Yes, usual nibs we used to write with in copy-books and flat nibs which we used for poster designing. There is no better writing utensil. If I am not mistaken, they were invented in China.

— What do your children write with?

Everyone knows how important it is for a child to develop fine motor skills. My elder daughter is a grown-up, she entered the college of the Ministry of Foreign Affairs, but I very well remember her to learn fastening up the laces. Modern parents try to make the life of their children simpler. They use hook & loop instead of laces, zippers instead of buttons, and ball pens instead of nibs. I consulted the neurologists who claim that on the finger-pads there are more receptors than in the rest of the body. This natural “wealth” is left non-demanded. To develop fine motor skills it is enough to practice playdough and clay modeling, write with a nib-pen. It is very simple.
By the way, one more interesting detail: children in Canada, Japan and China do not use ball pens until they are in the 5th grade. The law forbids it, because a child needs to feel how a nib touches the paper and change the weight.

— What is the future of the exhibition?

It is too early to speak about it. The exhibition will surely be demonstrated in one of New-York museums, in Paris, Tokyo. There are the invitations from Shanghai and Tel-Aviv.

— The exhibition was free for visitors from Russia…

Yes, it was a crucial condition. I wanted everyone willing to be able to come to the exhibition. The exhibitors also gave master classes and presented their works and collections free of charge.  I persuaded them that we all are creating the beauty which is priceless.